The Swede spoke on a number of subjects including the race for the LPGA player of the year, Saudi Arabian influence and Solheim Cup controversy. 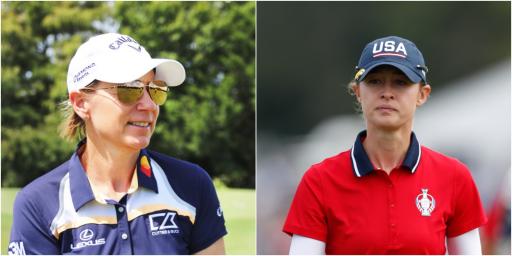 Annika Sorenstam has exclusively revealed to GolfMagic she hopes "golf will be the winner" as Saudi money floods into the game.

We caught up with the Swedish golf legend at her home in Orlando, Florida this week and quizzed her on a number of subjects.

Saudi Arabian influence and the battle between Nelly Korda and Jin Young Ko for the LPGA player of the year were discussed.

We pressed her on what she thought of the Solheim Cup controversies as well as what else she wants to achieve in the game.

As you can expect, Sorenstam had a lot to say about each subject and admitted she's targeting getting back out there in a few events in 2022.

Sorenstam, 51, wasn't even playing and she was making headlines earlier this summer, but that was mainly because of Jin Young Ko's play.

The South Korean golfer has been absolutely sensational this season and matched one of the Swede's records.

Ko was only two strokes from beating the record at the BMW Ladies Championship but the conditions were appalling.

A 71 was signed for and Sorenstam's record remained in tact, but the Swede conceded watching her try and beat her records is "fun".

MORE: LEE WESTWOOD GETS IN A TWIST AT YOGA

"She's been on a tear, right?" Sorenstam said, who admitted she hasn't managed to speak to Ko yet about this season's exploits.

"She got off to a slow start and I think everyone was focusing on Nelly Korda, and now they're kinda racing for player of the year.

"First of all she's a great player, she really doesn't have any weaknesses, she's friendly and popular - now she seems to be in full form."

She added: "On the LPGA Tour there's always a story line and it's good when it happens to good people".

Sorenstam couldn't say who she thought would emerge as the LPGA Tour player of the year.

"It's super tight," Sorenstam said. "Nelly obviously has to play quite good now, she got off to such a good start.

"But I tell people you gotta finish too.

In 2003 Annika Sorenstam became the first female in more than 50 years to tee it up in a @PGATOUR event at Colonial.pic.twitter.com/RIRfQAzCwg

MORE: HAS THIS GOLER JUST GOT THE BEST DEAL IN HISTORY?

MORE: WHY THIS BROOKS KOEPKA ADMISSION IS ODD

Asked whether or not we are likely to see another player dominate like her, she conceded there are far too many candidates to emerge.

"People are looking at Nelly, but she's got some competition," Sorenstam said after a morning of biking before heading out to the range.

"I know they're all hungry and they're all working hard trying to be better, especially when they are so young - it's going up."

Sorenstam is obviously no stranger to the Solheim Cup and has even been involved in those moments of controversy.

The Swede was involved in probably the most well-known pieces of bad blood at the 2000 Solheim Cup.

Sorenstam chipped in at the 13th hole at Loch Lomond Golf Club and thought she had drawn herself and team mate Janice Roberts level.

But she was accused of playing out of turn and forced to play her shot again after the United States consulted with captain Pat Bradley.

It left a sour taste in the mouth and the Europeans felt like it was an unsporting gesture and ultimately went on to lose the match 2&1.

It came to rest agonizingly close to dropping for eagle at the Inverness Club in Toledo, Ohio.

It was on the 13th hole again.

There's something about that number, isn't there?

Sagstrom thought she was conceding the putt for birdie but moments later the rules official informed the players it was picked up too soon.

Tears were shed and it left a bad taste in the mouth.

Korda and her partner Ally Ewing went up by one because of this moment and never relinquished the lead.

RELATED: HOW WILL THE PGA TOUR RESPOND?

Credit to Korda, who later said: "I'm at a loss, this isn't the way I'm supposed to be feeling."

Sorenstam said: "It seems like the Solheim Cup always has something, right?

"You just wonder, what is going to happen this time.

"In this case it was really not the players doing or anything.

"I think they handled it quite well, everyone can have their opinion of course."

She added: "The thing with these team events... everyone is just so fired up and engaged with the crowd and has the adrenaline pumping.

"It kind of gets a little bit bigger than it really is but also people get fiery."

Elsewhere in the golf world, Greg Norman has been making headlines.

MORE: IS THIS THE BEST CLUB PURCHASE IN HISTORY?

On Annika Sorenstam's 50th birthday, LPGA players reflect on all that she's done for the game. pic.twitter.com/I9femoEEdf

He's been named CEO of an investment group which will receive money from the sovereign wealth fund of the Saudi Arabian government.

They are going to be playing a 10-event series on the Asian Tour and it's likely Norman will want to branch out to a separate tour.

This week the Ladies European Tour is playing the Aramco Saudi Ladies International.

It's a controversial and uncomfortable topic, but human rights campaigners aren't happy.

Others have labelled the efforts of Saudia Arabian government entering world sport as simply sportswashing.

How can women play in these events when their own government treats them so appallingly?

But what does Sorentstam think?

"You know what I am just going to sit on the sideline," Sorenstam said. "I am not involved in any of that.

"I think it will play out, I just hope that golf is the winner in the end and that this is good for the game on both sides.

"So, yeah... it's an interesting development that we're starting to see.

"I just want what's best for the good of the game."

Her foundation is one the forefront, while she wants to retain her title at the U.S. Senior Women's Open.

There is the Scandinavian Mixed that she will attend while these days her family is the most important.

There's a few other projects in the pipeline.

But for now she's looking forward to winding down the year and then spending Christmas with her family at Lake Tahoe.

"Hopefully we hit the slopes and get that Swedish winter feeling," she said.

Sorenstam was speaking to GolfMagic as part of her new role as a brand ambassador for Revo eyewear.