Chloe Williams had a moment to forget during the Aramco Team Series event in Bangkok, but at least she and her playing partners saw the funny side. 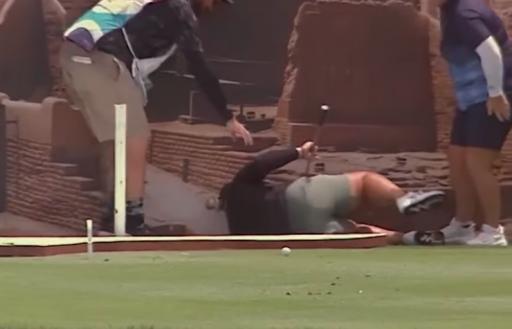 Ladies European Tour player Chloe Williams created one of the funniest and most memorable moments of the 2022 season so far at the Aramco Team Series event in Bangkok.

Williams was teeing it up on the 6th hole at Thai Country Club and as she stepped back to line up her shot, she stumbled across the advertisement board at the back of the tee box.

Williams took a tumble on the display that was promoting Diriyah and as soon as she hit the ground, she and her playing partners burst into laughter.

Luckily, the 27-year-old wasn't hurt at all and it was great to see that her fellow Welsh LET player Lydia Hall saw the funny side of things as well.

Related: The BEST Nike Golf shoes that you need this summer!

As Williams was helped on to her feet, the group looked down the hole and realised that the cameras had captured the accident, so Williams wanted to see it back.

She went to the cameraman and looked down the lens at the hilarious footage. It certainly made for an unexpected highlight of the week in Bangkok.

Team Hillier, made up of Whitney Hillier, Krista Bakker, Chonlada Chayanun and amateur player Pattanan Amatanon, won the event held during the week on 31-under-par.

Although Williams couldn't secure her first win on the Ladies European Tour this week, she certainly made headlines for other reasons.