The LPGA Tour Q-school has finished, but who earned their cards for 2022?

A host of familiar faces were vying for the chance to earn their LPGA Tour cards over the last two weeks in Alabama. 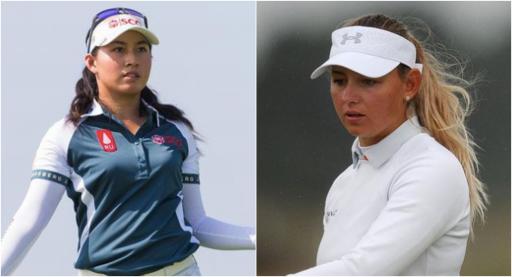 The LPGA Tour Q-Series finished on Sunday after two weeks of gruelling hard work for some of the most talented women's golfers in the world.

The players competed over eight tournament rounds and they all had the same aim: to finish in the top 45 places to earn their status.

The players who finished outside of the top 20 also achieved Symetra Tour status, but also the higher you finish in the eight-round series, the more starts you receive on the LPGA Tour.

After 144 holes of intense competition, South Korea's Na Rin An finished on 33-under-par and at the top of the leaderboard, one shot ahead of France's Pauline Roussin-Bouchard.

RELATED: QBE SHOOTOUT: HOW MUCH DID KEVIN NA AND JASON KOKRAK EARN FOR THEIR VICTORY?

An has competed on the Korean LPGA Tour for the last four seasons and her fortnight at Highland Oaks was only her second start in America. She finished in a tie for 63rd at the 2020 US Women’s Open.

She had 15 top-20 finishes in Korea in 2021 and she has two wins to her name on this circuit. She finished 21 shots ahead of Emily Kristine Pedersen in tied 14th in the Q-Series.

Pedersen was part of the 2021 European Solheim Cup side that beat the USA 15-13 in Ohio. She contributed three points to Europe's win.

She lost her LPGA Tour status in 2018 but in 2020, she won four times on the Ladies European Tour. A final-round score of 70 in Alabama meant she safely secured her LPGA Tour card for 2022.

The incredible Atthaya Thitikul was ranked at No.18 in the Rolex Rankings when she entered the Q-Series. She has two wins in 18 starts on the Ladies European Tour and she won the Race to the Costa Del Sol too, the year-long order of merit.

She also finished fifth in the Evian Championship and at the weekend, she impressed yet again with a third-place finish to grab her LPGA Tour spot.

Hinako Shibuno finished on 10-under-par after eight rounds of the Q-Series, which was enough to finish in tied 20th place.

Shibuno won the hearts of British golf fans when she incredibly won the AIG Women's Open Championship in 2019. It was the first time she had competed outside of Japan.

Mariah Stackhouse earned her card on the bubble at 4-under-par in tied 41st place, but now she is just the seventh African-American to earn her spot on the LPGA Tour.

She made her rookie debut on the tour in 2017 and made seven cuts. The 27-year-old unfortunately missed 13 cuts in 2021, which is why she returned to the Q-Series.