Even Nelly Korda, the best player in the world, got nervous in front of Tiger Woods... 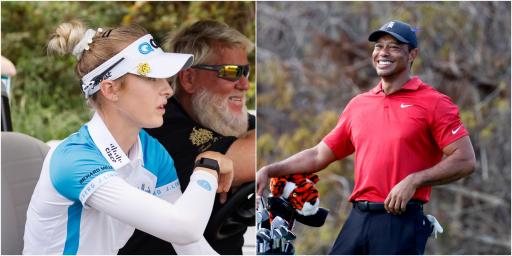 You would think Nelly Korda and Tiger Woods would have crossed paths at some point in their lives.

Both living in Florida. Both players who excel in their craft. Nelly is the number one player in the world.

Tiger has some experience in that. But it appears Korda, 23, met Woods, 45, for the first time at the PNC Championship.

Waiting by the side of the 18th green at the Ritz-Carlton Golf Club, Korda approaches the big cat and says in a shy manner: "Hi Tiger."

Nelly met Tiger for the first time. Her reaction says it all. pic.twitter.com/Wn2yEFP42h

Then she asks if her brother, a professional tennis player and her father, also a grand slam winner, can grab some pictures.

Man of the moment Woods duly obliges. You got it, done deal, he says before posing with the Kordas.

After telling Woods about their round (they shot 9-under) Korda walks off telling the cameraman that it was a dream come true.

Frankly, that is hilarious and adorable. Woods and his son Charlie dazzled on Sunday and came second to John Daly and his son.

Korda and her father Petr finished 12th in the event after signing for rounds of 63 and 64 to reach 17-under.

It was the first time Korda, who won her maiden major championship this year and an Olympic gold medal, played in the event.