The 23-year-old American is aiming to win her fifth title on the LPGA Tour this season but the South Korean is in fine form. 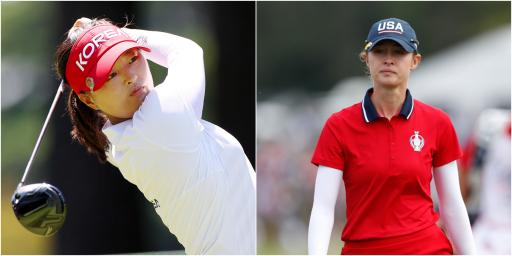 The LPGA Tour season comes to its conclusion tonight and it's all set up for a thrilling finale.

Nelly Korda versus Jin Young Ko. This could not have been drawn up more perfectly. They're in the final group in a four-way tie for the lead.

Both have been in blistering form all season and at this point it's still up for grabs who can claim the player of the year.

The United States' Korda, 23, and South Korea's Ko, 26, are gunning for their fifth wins at the CME Group Tour Championship.

What a day for Jin Young Ko.

She's vying for two trophies heading into the final round

Truly staggering achievements for two of the finest players on the LPGA Tour right now and are likely to ever see.

Also on the line is $1.5 million for winning the title.

Ko can overtake Korda with a win. Alternatively, she can finish second but she needs Korda to finish 10th or worse.

Ko fired a third round 66 to get herself back into contention.

That included finding 18 greens in regulation, 12/14 fairways and eight birdies in a row starting from the second.

Who wins is anyone's guess.

France's Celine Boutier is also one of the four players sitting on 14-under at Tiburon Golf Club alongside Japan's Nasa Hataoka.

Lexi Thompson and Solheim Cup superstar Leona Maguire are within touching distance, only two strokes back.

It's all set up for a fascinating conclusion.

NEXT PAGE: SHANE LOWRY EYES UP A CAR IN DUBAI