World No.2 Nelly Korda was diagnosed with a blood clot in March, but she announced on Instagram that she will be at Pine Needles next week. 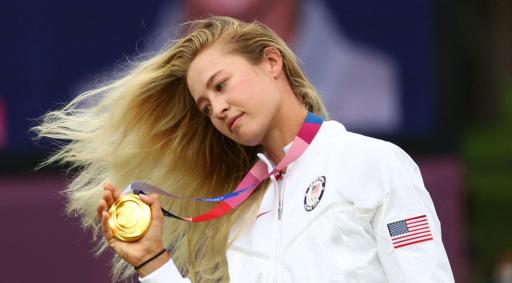 World No.2 Nelly Korda is set to return to action at the US Women's Open next week following surgery on her blood clot in April.

The 23-year-old hasn't played on the LPGA Tour since the LPGA Drive On Championship at Crown Colony in February due to a blood clot she discovered in March.

After receiving surgery in April, Korda is now ready to play at Pine Needles Lodge and Golf Club next week in what will be just her fourth start in 2022.

"See you guys @uswomensopen next week," is what Korda posted on Instagram on Friday. She won her first major title at the KPMG Women's PGA Championship last June.

Related: Our BEST BETS for the weekend at the Charles Schwab Challenge

Korda's blood clot emerged after she noticed swelling on her arm after a gym workout. Her doctor advised her to visit the emergency precaution room.

She dropped a hint on her Instagram page last week that she could return to action soon, posting a video of herself hitting some balls with a compression sleeve on her arm.

In 2021, Korda won four times on the LPGA Tour including her first major championship. Her most recent win came at the Pelican Women's Championship in November.

She has seven wins in total on tour and she also won the Olympic gold medal in Tokyo. Her participation next week is certainly exciting news for all of her fans.

Korda came second in the Race to the CME Globe Final last season and she also came second on the official money list. She has been one of the outstanding players of the last 12 months.