Sungjae Im came second at The Masters in November 2020 and he is in great shape to contend at Augusta National this week as he leads after day one. 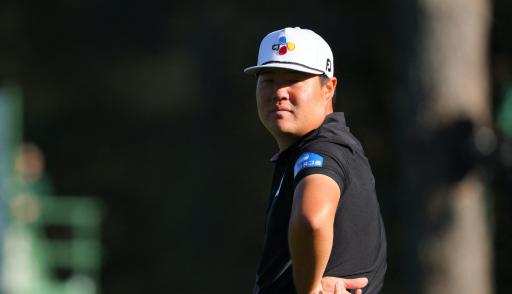 Sungjae Im seemed to ruin his great start in the first round of The Masters with two bogeys just after the turn, but this couldn't be further from the truth.

The talented South Korean put these mistakes behind him with a superb eagle on the 13th hole and he added a birdie at the 15th hole to card a 67.

At 5-under-par, he leads at Augusta National by one shot from Cameron Smith who carded eight birdies and two double-bogeys on his way to a 4-under-par 68.

At just 24 years old, Im is a scoring machine. In the 2021 PGA Tour season, he broke the record for the most birdies made in a single season. He finished on an amazing count of 498.

His impressive play has helped him become a winner of the Honda Classic and the Shriners Children's Open and you feel he isn't finished there.

He finished runner-up at Augusta National when Dustin Johnson was untouchable in November 2020, but this is Im's best piece of major form by some way in his career so far.

In his last eight appearances at major championships, he has missed the cut four times and only made one top-10 finish.

The first major of the year seems the only one that the World No.26 feels confident at. He tees off at 2.39 pm (UK time) later today to build on his superb start.

Next Page: PGA Tour pro SHANKS his ball into crowd at The Masters