Mackenzie Hughes was spotted having a quiet word with Matthew Wolff after a dreadful day at The Masters. 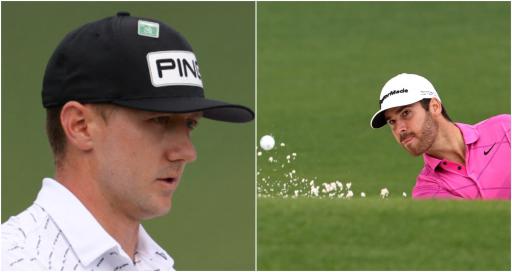 Matthew Wolff will have wanted Augusta National to swallow him up after he endured a nightmare opening round at The Masters.

The 22-year-old finished on 9-over par after 18 holes which included more than a few F bombs and a broken TaylorMade club.

Wolff opened with a catastrophic double bogey, then made bogey at the second and third. More bogeys at seven and eight followed. He did make birdie at nine to momentarily stop the bleeding. But Augusta National does not provide mercy to loose swings.

As far as opening rounds go from someone with lofty expectations on a soft and gettable Augusta National on day one of the first major of the year, this really was the stuff of nightmares. Nine bogeys. Two doubles. Crikey.

You have to spare a thought for Wolff, nobody wants to see that. Wolff has been hard on himself in the past and been open about his struggles.

He stepped away from the game last season for a much needed break to try and find some happiness.

His playing partner for the day, Mackenzie Hughes, noticed how down on himself he appeared to be and was spotted having a quiet word with the young American.

Candaian Hughes, who shot a 1-over par opening round to sit T31, told the media: "Matt had a hard day.

"I know he's in the past been open about struggling with just being happy, and I just told him that he's a tremendous competitor and that we all want to do great but his golf score does not define who he is as a person.

"I've been young, and I've been there where you're really hard on yourself and you expect greatness every day.

"Then you're out here for a long time, and you realize that you're going to have lots of days that you don't like. It's just the nature of sports.

"So we just tried to maybe give him a couple words of encouragement because it's -- well, we've all been there before."