Brooks Koepka on Tiger Woods: "I understand what he's up against"

Brooks Koepka discusses Tiger Woods and his own preparation for The Masters at Augusta National. 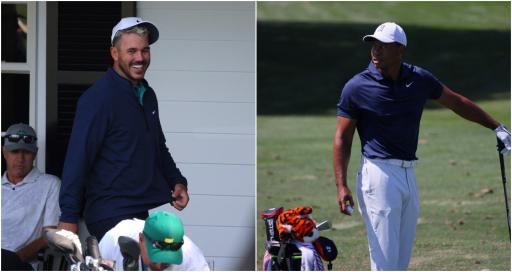 If there's one thing we know about Brooks Koepka it's that he isn't afraid to speak his mind.

Koepka was one of several players who faced the media on Monday ahead of the 86th Masters.

Of course, a topic of conversation included the return of a certain Mr. Woods but Koepka - though happy to see Tiger healthy - is just concentrating on himself.

He revealed he came out to Augusta National on the Monday before he participated in the WGC Match Play and played 36 holes with his father.

"So I've seen the changes, and I think they're good. They always do a pretty good job."

Augusta National, as ever, is one of the toughest tests in golf. Koepka has in the past made some interesting comments about why he is so confident in the majors.

So why do difficult courses like Augusta suit Koepka?

He said: "I think because you can't miss it in certain spots. You've really got to have a good short game number one, but number two you've got to understand where to hit it and where to miss it, and I think sometimes on -- I've said it over the last couple weeks, I think the setups are a little too easy.

He added: "And it brings so many guys in where if it's very difficult and very challenging and we don't see many pins three off the corners or four off the corners until you get to majors, and you're not making it up-and-down if you short-side yourself, where on tour they're five and six and you've got room."

The Tiger buzz during Monday was incredible. One pro said he could hear the roar as Woods exited the clubhouse for his afternoon practice round.

What does Koepka make of all the noise, and will it play into his hands?

He said: "I have no idea. I mean, I'm just -- look, I'm happy he's becoming healthier and able to play golf, and I think that's -- we need him, the game needs him, everybody needs him, the fans need him, all that stuff.

"But at the end of the day everybody is just out here competing.

"Look, I was in somewhat of his shoes trying last year two weeks after surgery. This place isn't exactly an easy walk. I understand what he's up against. It'll be difficult. But if anybody can do it, it's him."

Woods has played through pain before. We know that he played on a broken leg to claim the 2008 U.S. Open.

Koepka, over the last few years, has had his injury struggles too.

He added: "Yeah, it's very difficult. I had to get shot up just to play last year. It's difficult enough to walk, and I mean, the hours before to the hours after it was some of the longest days.

"I don't know everything he's going through. His was a lot worse than mine, so I'm not trying to compare it. I just know it's difficult walking this place when you don't have the same body parts you're used to."