Here's how some of the games elite players reacted to seeing Tiger Woods at Augusta National ahead of The Masters. 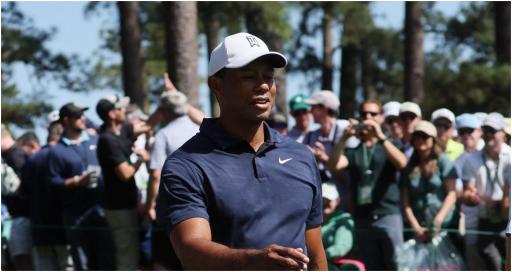 Tiger Woods is back at Augusta National to continue his preparation for the 86th Masters.

At the time of writing, Woods, 46, had not made his "game-time" decision about whether to peg it up at Augusta National.

But judging by the speed, power and finesse that Woods, 46, dazzled the thousands of patrons that followed him on Monday he will play.

There is no doubt that having Woods back in the fold means he will command all of the attention over the next week should he play.

It's easy to forget we have a new World No.1 in Scottie Scheffler and could have a new one by dusk on Sunday evening.

Rory McIlroy is also going for the grand slam, too. It's not all just about Tiger. Still, the pros were excited to see him back.

Here's how they reacted:

"Yeah, it's unbelievable. Tiger is probably the greatest of all time, so just to see him out here is really cool. You think it was like yesterday when he had that brutal car accident, and he's already came back one time and won it, so I wouldn't put anything past him. It's just really awesome for the game of golf, for guys like me growing up and seeing him, to see him out here warming up is just -- it's cool. That's all I've got to say."

"Well, in an ideal world you wouldn't want to come back at this golf course. You'd want somewhere a bit flatter, maybe a little bit shorter. This is a long, hilly test of stamina now, and if you haven't played, then it just makes it a little bit harder.

"But he's a fit guy, Tiger, so I wouldn't envisage any problems. I would imagine he would like, in an ideal world, if you talked to a doctor or a physio or someone who really knew what they were talking about, they wouldn't go for a hilly test like this, but he's probably been playing a flat course down in Florida. He's probably walked around his home course a few times. At some point he's got to test it out, hasn't he."

"I mean, as players, we love it. I think we're all Tiger fans. I learned my lesson to never count him out a few years ago when he came -- he's come back so many times from injury. So he's an inspiration to all of us.

"Even when I hurt my neck earlier this year, I thought about it stinks right now but I can come back, I can make a full recovery, but he had a lot worse injury. I love that he's going to give it a go."

"I've learned long ago never doubt the guy. If he can get around, which seems to be the question, you can't doubt his golf."

"I'm happy he's becoming healthier and able to play golf, and I think that's -- we need him, the game needs him, everybody needs him, the fans need him, all that stuff. But at the end of the day everybody is just out here competing. I'm worried about myself and I'm sure everybody else is worried about themselves.

"Look, I was in somewhat of his shoes trying last year two weeks after surgery. This place isn't exactly an easy walk. I understand what he's up against. It'll be difficult. But if anybody can do it, it's him."

"I'd be surprised if it was anyone else that's ever lived. So, no, I'm not surprised. I am amazed. It is a true testament to his work ethic because we all know what he does on the golf course, how hard he works, and the stories and the legend. But sitting there and doing all that PT is -- that's got to be just boring at the very least, let alone hard.

"It reminds me of like the documentary The Muse with Kobe Bryant after he pops his Achilles. It's just him picking up marbles with his toes and putting it in, and he's doing it way more than anyone else would do. That's what I imagine Tiger is doing, just like the most reps you possibly can to get ready. It's remarkable really."

"Look, what's impressive is Tiger won't play here unless he thinks he can win. He's not coming to wave at the crowds. He's coming to try and win the tournament. It looks like he'll tee it up, and if he does, he feels like he can win, and that's impressive."

"He's here, right? It's kind of already a return, right? But it's great to see his face.

"I mean, I was walking down -- I was teeing off on 3, and he was walking down 17. He just, like, jumped up and raised up, and we were both kind of air high-fiving, like saying, "What's up." It's just great to see him in a positive frame of mind.

"I haven't spoken to him much, but I have seen him, and we've said "hi" a little bit. And it seems likes he's in a really great frame of mind and he wants to win. Obviously he's determined to win. He wants to come back here and win. And he's got a lot of players that have had a lot of time to kind of catch up, albeit Tiger is Tiger and you can never count him out.

"He is one that may shock a lot of people if he does tee it up this week. Very, very excited to have him back. Creates a lot of hype and whatnot. And, shoot, from the driving range, we could hear the loud roar when he came out of the clubhouse up to that first tee, and that was pretty special to see or hear at least.

"Couldn't be more happy for him in the place he's at right now, coming back, and proud of him, too. Shoot, coming back off that injury, we've had some conversations, and man, I don't know how he's done it. It's very impressive."

"Yeah, great to see him. I'm sure he's been preparing hard the last little bit, and living in Jupiter, heard rumblings when I would go to Medalist that he had been out there, so that's really exciting.