Legendary commentator Jim Nantz has revealed how long he would like to continue commentating on The Masters at Augusta National. 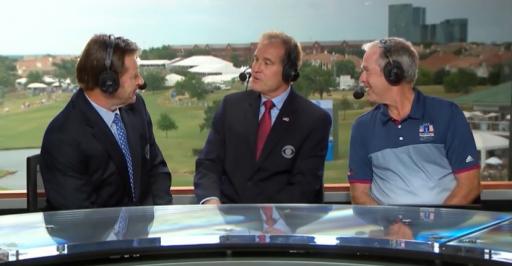 Legendary broadcaster Jim Nantz says he wants to commentate on the Masters until the 100th edition, making it a total of 51 times he has called the action.

Speaking on the Dan Patrick Show, Nantz, 63, has opened up on the very first time he called the major.

Apparently, Nantz was so nervous calling his very first Masters his teeth were chattering and he was worried the noise would be picked up on the microphone.

Nantz said it was when he was 11 years old he told his parents watching the Masters that he wanted to be "one of those voices".

He told the show:

"I would like to do it [commentate on the Masters] 51 times, as bizarre as that sounds. My 51st Masters would be the 100th playing of the Masters. And I'd like to be there to see the end of the first century. That's just a little goal I have in the back of my head. I'm through 37 now, so 14 to go hopefully."

Nantz was 26 years old when he called his first Masters in 1986 alongside Tom Weiskopf.

Weiskopf died in August at the age of 79.

Nantz said of his first call:

"I must confess that I was so nervous my tee where chattering involuntarily. I was worried that the noise emanating from my clicking molars would be picked up by my open microphone."

"The Masters, to me, is the thing that is the deepest in my heart. I've never chosen one sport as my favourite event to do but I think everyone knows that the Masters is something I feel a real personal tie to.
"It was the one event that when I was 11 years old I turned to my mom and dad and said, 'that's what I'd like to do someday, I'd like to be one of those voices. … I want to do that.' And I've been so fortunate that I'm still living that childhood dream even into my 60s so, it's been pretty amazing."
Related Articles
Two-time Masters champ worried about tension with LIV Golf players at Augusta
TWO more players added to The Masters field as PGA Tour clash with LIV Golf

When Nantz returns to Augusta National in 2023 it will mark his 38th consecutive year behind the microphone for CBS.

Here is to hoping he gets to his target.

Before you leave, why not take a look at some of the best lines from Nantz during Masters' broadcasts:

When Jordan Spieth won the 2015 Masters:

"One of the epic performances in the annals of the sport."

From the 2004 Masters when Phil Mickelson won his first Green Jacket:

"Today at 18, will the music be reserved for him at long last?"

"A passenger a year ago on Phil Mickelson's journey."

"There was tranquillity in Augusta, a gentle preamble, that suggested something improbable was about to evolve."

From the 2008 Masters when Trevor Immelman slipped on the Green Jacket:

"It's a solitary journey, but it's one that no player … makes alone."

When Bubba Watson won the 2012 Masters:

"Champion golfers who have etched their name in history where the primary colour ... is green."