Report: Saudis tried to rent Augusta clubhouse during Masters to recruit for LIV

According to a report, the Saudis reportedly wanted to rent the Augusta National clubhouse during the Masters to "wine and dine" potential LIV Golf players. 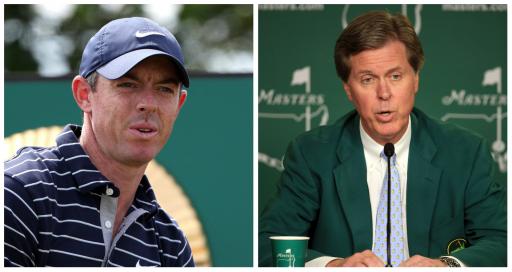 There is absolutely no denying LIV Golf has caused more than a ripple in the game, with some players like Rory McIlroy arguing it has become "fractured".

How professional golf goes from here and particularly how the majors deal with LIV will be interesting to see.

One thing is clear though, and that LIV Golf has been years in the making.

The aforementioned McIlroy revealed before the Wells Fargo Championship on the PGA Tour last season that he was approached about such a venture as far back as 2014.

McIlroy called it a "money grab" back then and it appears that even in 2022 his opinion hasn't really changed.

An expose this week written by The New Yorker has delved into the history and formation of LIV.

You can read the full article here.

And there was one audacious claim that related to two men at the centre of LIV's operation.

Those being Majed Al Sorour (pictured below), a businessman linked closely to the Saudi royal family and Yasir Al-Rumayyan, who is the chairman of Premier League football club Newcastle Untied and the governor of the Public Investment Fund, which is bankrolling LIV Golf to the tune of billions of dollars.

Apparently it was in 2018 that Al-Rumayyan recruited Al Sorour. He made him the chief executive of Golf Saudi and they then reportedly started making their presence known in the golf world.

According to the report:

"At the Masters one year, according to a person familiar with the conversations, they asked about renting Augusta National's clubhouse to host a meet and greet for top golfers."

According to the reporter's source, this person reportedly turned round to Al Sorour and said: "You can't just do that!"

The report also alleges that Jay Monahan, the commissioner of the PGA Tour, was also approached by the Saudis and told they had a budget of $1bn they wanted to invest in the Tour.

According to the report, the PGA Tour have denied they were ever approached.

Monahan recently revealed the subject of LIV Golf was making him feel blue in the face as he revealed he would not entertain the idea of co-operating with the league.

After this alleged offer, the Saudis agreed to finance the Premier Golf League, but that fell through and they elected to go it alone.

But such a claim relating to wanting to rent Augusta National's clubhouse clearly would have rubbed some Green Jacket owners the wrong way.

The claim is even more interesting considering Augusta National chairman Fred Ridley has been named in the lawsuit bought against the PGA Tour by LIV Golf.

Court documents claim he "personally instructed a number of participants in the 2022 Masters not to play in the LIV Golf Invitational Series."

It is unclear how the Masters will approach LIV going forward. Ridley refused to directly answer questions in his annual press conference.

Related: Which LIV players have made the most money?

Recently Cameron Smith, the winner of the 150th Open and one of LIV Golf's biggest signings, said it would break his heart if he were unable to return to Augusta.

Elsewhere, Al Sorour has claimed that if the majors were to ban LIV players then he would simply create his own.