Jon Rahm hates THIS aspect of Augusta National: "That's what p****s me off"

Jon Rahm was unhappy with the number of mud balls that he had in the first round of The Masters and he made his feelings known after his round. 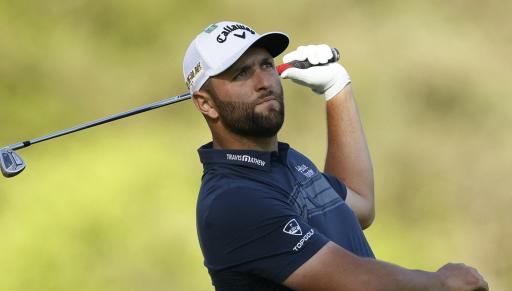 Jon Rahm was extremely annoyed by the mud balls and the bad luck he experienced in the first round of The Masters.

The Spaniard shot a frustrating round of 2-over-par on Thursday. He made four bogeys and two birdies on his way to a 74 and at the close of play, he was seven shots behind Sungjae Im.

The former World No.1, who was knocked off his perch by Scottie Scheffler at the WGC Match Play, was left wondering what could have been with a bit more luck.

A number of players experienced mud balls on Thursday, including Bubba Watson, and Rahm didn't mix his words when expressing his annoyance.

"Most hated question on the planet. Not happy," said Rahm.

Related: Watch: Bubba Watson has ALMIGHTY STROP with mud ball at The Masters

"Played great golf, got four mud balls. What am I going to do about that? That's what it is. It's bad luck, and that's what p****s me off. That's all I can say.

"I mean, to hear the cheers and the atmosphere is good. I think it would be a big difference more Sunday than a Thursday. But to be honest, it's not where my head's at right now," he added about the atmosphere at Augusta National.

Rahm is by no means out of contention at this year's Masters. In five appearances at this event, he has made four top-10 finishes, with his best finish of fourth in 2018.

Rahm has the game to win his second major championship and he teed off at 3.23 pm (UK time) this afternoon for his second round.

Next Page: Bryson DeChambeau disappoints AGAIN in the first round of The Masters