Tiger Woods: Betting odds of big cat WINNING the 2022 Masters have been listed

Fancy a punt on the 45-year-old to win his sixth green jacket? 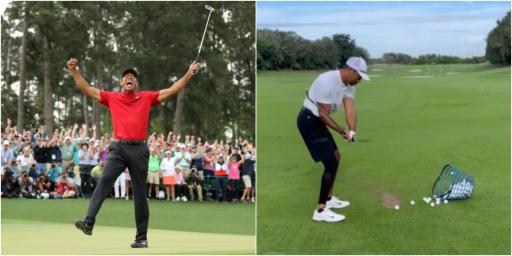 It only took one swing but now we have the odds of Tiger Woods winning the 2022 Masters.

Only a few months away, it will be a tall order to see Woods peg it up at Augusta National but he's now listed at 35/1 on DraftKings to win it.

Woods, 45, sent the golf world into a frenzy two days ago with two words: 'Making progress'.

Alongside it, we saw Woods swing what is reportedly a 7-iron at Medalist Golf Club near his Florida home in Jupiter.

It was three seconds of pure poetry. It has been shared and viewed millions of times. It's also been broken down into detail.

Heck, even golf instructors are casting their eyes over it to examine his movements. Is it really possible? Is this on?

You might be sitting there thinking about having a punt on the big cat, but his odds to win his sixth green jacket are remarkable.

Remarkable in the sense that he's got lower odds than Phil Mickelson (65-1), who only this year dazzled us at Kiawah Island with a stunning victory.

Cast your mind back only a few short months ago and you would have probably got these same odds of Woods just playing at Augusta.

Still, we're sure there are a few Woods fans out there already who have punted.

There is absolutely no guarantee that Woods will play in a professional event again let alone a major.

We do know, however, that it looks like he is at least going to try after his horror crash when his luxury SUV plummeted through a ravine.