Five things you didn't know about the Open at Prestwick

Five facts about the birthplace of the Open Championship 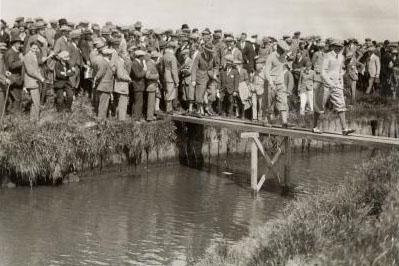 2. There was no Open Championship in 1871. Rules stated that if the same person won three consecutive opens they would be entitled to keep the Challenge Belt the winner was awarded. Young Tom Morris achieved this feat in 1870, which led to the tournament being cancelled the following as there was no prize to give to the winner. The Open returned in 1872, when Young Tom Morris was victorious again, becoming the only man to win four consecutive Open Championships. The Claret Jug was awarded for the first time the following year.

3. Despite not hosting the Open since 1925, Prestwick has still held the tournament more times (24) than any other course apart from the Old Course at St Andrews (28). Muirfield is third, having hosted its 16th Open in 2013.

4. Prestwick fell out of the rotation to host the Open not because of the quality or the length of the course, but because it could no longer accommodate the ever-increasing galleries. An incredible 10,000 people turned up to watch the final day of the 1925 Open, won by Jim Barnes with an aggregate score of 300. This was also the last Open played over two days. Troon Golf Club replaced Prestwick in the rotation thereafter.

For more information on golf in Scotland, please visit: golf.visitscotland.com
Where to play golf: www.prestwickgc.co.uk
Where to stay: www.fernbank.co.uk