Six of the Best... golf blunders

Poulter's not the only person to make a high-profile error... 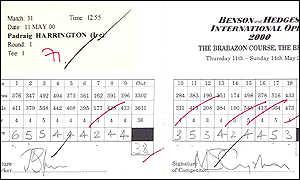 After Ian Poulter’s ball-marking blunder which cost him a shot in his playoff with victorious Robert Karlsson at the Dubai World Championship, there was only one place we could go with today’s Six of the Best.

Here are some of golf’s biggest cock-ups of all time.

The Irishman was dramatically disqualified from the Benson and Hedges International Open in 2000 an half an hour before he was due to tee-off in the final round.

The then 28-year-old was leading at The Belfry by five strokes going in to the final day, after a third-round course record 64, when the mistake was noticed.

When the three cards - Harrington was playing with Jamie Spence and Michael Campbell -  were passed round for signing, Campbell signed all three. Catastrophically, Harrington checked his card and mistook Spence’s scribbled name as his own.

Bizarrely, the error may have been missed had management not wanted to display Harrington’s scorecard in the Belfry’s hotel.

The Dubliner took it on the chin though. “There hasn’t been a death in the family,” he said.

Other card-signing mishaps involved Mark Roe and Jesper Parnevik at the 2003 Open Championship which caused the BBC all kinds of problems, while Golfmagic members felt little sympathy for Robert Rock and Marc Warren at this year's Irish Open.

Arguably the most sporting of all games, golf has long been played by honest and noble men and women across the globe.

How many times have you read stories of players admitting to mistakes and imposing penalties on themselves? And it’s been going for as long as the game itself.

At the 1925 US Open, Bobby Jones took stance for a chip on a steep bank and, just prior to impact, his ball moved ever so slightly.

No one saw it, but Jones did. He penalised himself one shot, a move which, although admirable, cost him the title. Instead, he dropped into a playoff with Willie Macfarlane – which he lost.

The Argentinean is one of South America’s most successful golfers, with seven PGA Tour wins, nine European wins, 62 conquests on his home continent and a whopping 131 Argentine Tour victories to his name.

But De Vicenzo will forever be best remembered for his error at the 1968 Masters. Having made birdie on the par-4 17 th, playing partner Tommy Aaron inadvertently marked him down for par.

The Argentinean did not check for the error before signing and the mistake cost him a playoff place against Bob Goalby, as the Rules of Golf state the higher score which was signed for must stand.

And De Vicenzo’s addictive personality coupled with his broken English resulted in one of golf’s greatest ever quotes: “What a stupid I am!”

With storms on the way at the 1940 US Open, Oliver, along with EJ Harrison, Ky Laffoon, Claude Harmon, Leland Gibson and Johnny Bulla, teed off early to avoid the bad weather.

All six were disqualified, but Oliver suffered the most, having shot a final-round 71 to clinch a place in a three-way playoff with Gene Sarazen and Lawson Little before being booted out – despite pleas from his peers.

What do these three have in common? Well, they’ve obviously all been disqualified from tournaments after breaking the rules, otherwise they wouldn’t be in this feature.

It’s the manner in which they were busted which makes for the good, if slightly humorous, story.

Back in 1987, Stadler used a towel to protect his trousers while kneeling for a particularly awkward shot – deemed an illegal construction of a stance.

An eagle-eyed viewer spotted this on television and called in the error to tournament officials. Stadler finished second. He got nothing.

Then in 1991, a television viewer ratted Azinger out for moving a loose stone as he took stance to hit a ball from shallow water at the Doral Ryder Open. As we all know - and so should he - moving loose impediments in a hazard is illegal, and the American had a big DQ stamped on his card.

Can you see the pattern? Fast forward to this year and LPGA star Inkster hit a bit of traffic at the tenth hole of the Safeway Classic at Pumpkin Ridge.

With a few moments to kill, the 50-year-old attached a donut weight to her club and swung a few times to stay loose.

Yep, you guessed it, as she was called forward to take her tee shot, she forgot to take off the training aid. A viewer spotted it while watching on the box and, again, a call was made.

“It had no effect on my game whatsoever, but it is what it is,” said Inkster. “I’m very disappointed.”

She should perhaps just be happy that people are watching the LPGA on TV...

Okay, not exactly a rule break but let’s see how you read into this.

At the 1933 Ryder Cup, the American three-putted on the final green in his match against Syd Easterbrook to gift the Cup to Great Britain & Ireland.

Two putts for a half would have levelled the match, meaning that US retained the famous trophy. But he putted past the hole with his approach and missed coming back.

It happens, I hear you say, but take into consideration that Shute’s father was born in Devon and was a west country professional makes it a tad suspicious.

“Come on son,” he may have said. “Great Britain are taking a pounding year in, year out. Just let us win one.”

Incidentally, Shute Jr went on to win the Open a week later at St Andrews before going on to win back-to-back USPGA Championships in 1936 and 1937 – a feat not replicated until Tiger Woods at the turn of the century.