The Masters: Top 10 most unlikely winners

Augusta has seen some unlikely winners, but who was the least expected champion? 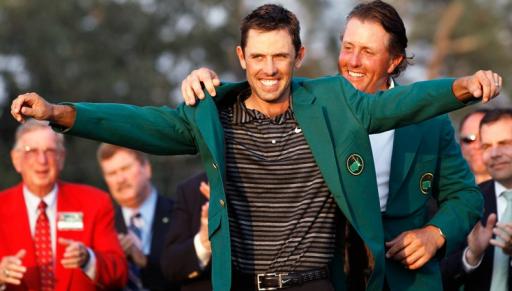 Charl Schwartzel was very much a solid player back in 2011, but many considered he was still too green to win a major in his first full season on the PGA Tour.

The South African played well in the opening rounds and found himself in second place going into the final day, albeit four shots behind Rory McIlroy.

Schwartzel went off with a bang, birdieing his opening hole on Sunday before an eagle at the third. His finish was just as impressive, birdieing the last four holes to card a 66.

"It was such an exciting day, with all the roars," said Schwartzel. "The atmosphere was just incredible."

At the other end of the spectrum, McIlroy suffered his infamous meltdown and came home in 80. The Northern Irishman's loss was Schwartzel's gain.

In a nine-year stretch between 1958 and 1966, Jack Nicklaus, Arnold Palmer and Gary Player won every Masters competition – bar one.

In 1959, Art Wall Junior provided a big upset to the Big Three - an intimidating trio that ended with 34 majors between them.

Wall’s finish was exemplary, birdieing five of his final six holes to card a round of 66.

After undergoing surgery to remove a tumour on his diaphragm, Trevor Immelman missed the opening eight weeks of the 2008 PGA Tour.

But the South African was joint leader with Justin Rose after round one and stayed in front from then on.

The 28-year-old even overcame an untimely double-bogey on the 16th to defeat four-time champion Tiger Woods by three shots for a maiden - and still solitary - major title.

"It was just so tough - there was a disaster around every corner as I showed on 16, but I just hung in there," said Immelman.

Mike Weir was not only the first Canadian to win a major, but he was also the first left-hander to win the Masters.

Phil Mickelson and Bubba Watson’s recent victories at Augusta have many thinking the Georgia layout is suited to lefties, but Weir didn’t have this comforting thought in 2003.

The 32-year-old held his nerve to defeat American Len Mattiace in a sudden-death play-off, winning with a bogey on the first extra hole.

"It's something I've dreamed about for a long time and worked very hard for it. It's a thrill and tough for me to put into words because I wouldn't do it justice," Weir said.

Angel Cabrera, nicknamed El Pato (the Duck) because of his waddling cadence, arrived at Augusta in 2009 ranked 69th in the world and left the highest-ranked winner in the famed event’s history.

The quiet Argentine had the 2007 US Open to his name, but that was the only PGA Tour trophy in his cabinet, and few were backing him to contend in Georgia.

Cabrera had a fired-up Tiger Woods and Phil Mickelson to contend with as they made a final day charge, shooting 68 and 67 respectively, but it wasn't enough to catch Cabrera.

A final round of 69 got him into a play-off with Kenny Perry and Chad Campbell, and a par on the second extra hole sealed the Green Jacket.

“I felt that when Tiger and Phil were making birdies and were making a move, I had to make a move myself in order to be the winner,” Cabrera said while savouring victory.

"You have to be a long hitter to win the Masters," they said, while stroking their chin with an arrogant air of authority. Zach Johnson didn’t get the memo, and gave hope to fellow shorter hitters through victory in 2007.

The American played "thinking golf" around a blustery Augusta, famously laying up to every par five and trusting his wedge play.

Johnson, who was available at 200-1 before the start of play, came through a pack of players on the final day to finish two shots ahead of Rory Sabbatini, Retief Goosen and Tiger Woods.

The 31-year-old finished on one over, the joint-highest winning score in Masters history.

Johnson said: "I tried to be non-emotional out there - that was one of my goals. I just tried to stay in the present and go through my processes."

After 24 Masters there had never been a winner from outside the United States – until Gary Player came along.

The South African, 25, won the Open two years beforehand, but on home soil the Americans had a stranglehold on the Masters and it seemed unlikely a foreigner would be able to loosen their grip.

Palmer, nicknamed the King, already had three Green Jackets and thanks to a one-stroke lead going down the last, looked on the verge of a fourth.

The pair went into the greenside bunker on 18, leading Palmer to double-bogey. Player held his nerve and got up-and-down, sealing a miraculous victory by one stoke.

"It was a very important thing because it gave encouragement for many to follow suit," Player said.

Larry Mize was hardly a superstar on the world golf circuit in 1987, but the opponents he lined up against in the play-off certainly were.

The Georgia native, boasting a solitary win, beat Greg Norman and Seve Ballesteros after extra holes following one of the most remarkable golf shots you will ever see.

With Ballesteros eliminated, Norman thought he would put the previous year’s runner-up finish to bed and hoped to shed the “bridesmaids” tag he had been labelled with. His ball perched on the edge of the green, while Mize’s resided some 140-yards away, a devilish up-and-down awaiting him.

While the Australian lined-up what he must have though was a winning putt, Mize guided his ball into the hole after a magical chip. Norman missed his putt and Mize was the unexpected winner.

When asked if he was trying to hole his now historic chip shot or merely trying to get it close, he said: "Both....but when you're playing somebody like Greg Norman, you can't be trying to make pars."

Most players are pleased to make the cut in their first Masters, let alone compete - let alone win the thing.

Fuzzy Zoeller is one of only three players to have won the Masters on their debut - and the first since 1935 - and he did so after a Herculean charge.

With just a single PGA Tour to his name, achieved earlier that season, the 27-year-old Zoeller was five shots adrift of Ed Sneed going into the final day.

But Zoeller, from Floyds Knobs, Indiana, clawed his way back to beat Sneed and Tom Watson in a play-off.

"To me, pressure is just another word. People tell me I never looked nervous or tense on the course, but believe me I was," said Zoeller.

“Done, washed up, through,” is how golf writer Tom McCollister described 17-time major champion Jack Nicklaus before the 1986 Masters.

The 46-year-old hadn’t won a major for six years, and hadn’t won at Augusta in over a decade, despite having five Green Jackets to his name.

In truth the Golden Bear’s powers were waning, and it would be his last victory on the PGA Tour – but this was a final hurrah like no other.

As Nicklaus teed it up on Sunday, four shots off the lead, there would have been few expecting what was to come. Six birdies and an improbable eagle meant the Golden Bear carded a 65 to take the championship with a score of nine under.

With his son Jackie on the bag, Nicklaus had become the oldest Masters champion and added an 18th major to his haul.

"I'm not going to quit, guys,'' Nicklaus told reporters after his historic win. "Maybe I should. Maybe I should say goodbye. Maybe that'd be the smart thing to do. But I'm not that smart.''