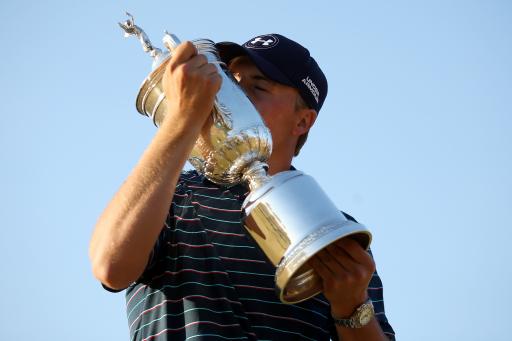 Jordan Spieth added to his Masters victory by winning the US Open by a stroke at controversial venue Chambers Bay.

Dustin Johnson three-putted the last hole from 12 feet to finish runner-up on four under, meaning the 21-year-old Texan clinched his second major of 2015.

Spieth became the youngest winner of the year’s second major in 92 years, and remains on course to become the first player to win all four majors in a calendar year.

"I'm in shock but I feel for Dustin," said Spieth. "It's cool to be able to have two legs of the grand slam now, and to conquer golf's hardest test - the US Open is conquering the hardest layout in all of golf.

Jordan Spieth added the US Open to his Masters title with a one-shot victory at controversial venue Chambers Bay.

The 21-year-old Texan is the youngest winner of the US Open in 92 years, and remains on course to become the first player to win all four majors in a calendar year.

Dustin Johnson three-putted the last hole from 12 feet to finish runner-up with Louis Oosthuizen on four under, while world number one Rory McIlroy ended tied ninth, five shots back.

"I'm in shock but I feel for Dustin," said Spieth. "It's cool to be able to have two legs of the grand slam now, and to conquer golf's hardest test - the US Open is conquering the hardest layout in all of golf."

"I didn't have my best ball-striking at all and really grinded over those four or five-footers - that was the difference."

Spieth started the final round in a four-way tie for the lead but after 16 holes he had pulled away from the field and boasted a three-stroke lead with two to play.

A double bogey on the 17th drew him level with Johnson, but Spieth was able to hole his birdie putt on the last for a 69, while his compatriot pushed his wide.

"I'm happy with everything in my game right now," said Johnson, 31, who spent six months away from the game on a "voluntary leave of absence" in 2014.

"I had a chance to win again a major on a Sunday. I thought I handled myself very well. I hit the shots when I needed to. So I know what it takes to get it done, it's real simple. I need to get it in the hole faster.

In the Bag: Jordan Spieth

"I didn't think I was hitting bad putts, they just weren't going in,"

McIlroy briefly threatened the top of the leaderboard after carding six birdies in his opening 13 holes, but the 26-year-old dropped two shots in his last four holes to score 66.

South African Oosthuizen posted six birdies in his final seven holes to finish in second place, a remarkable turnaround following an opening round of 77.

Tiger Woods missed the cut after rounds of 80, 76, while Phil Mickelson, bidding for a first US Open after a record six runner-ups, finished tied 64th alongside the 51-year-old Colin Montgomerie.

The Seattle layout's greens came under fire from the players throughout the week, as did its heavily undulating greens.

What do you make of Jordan Spieth's win, the US Open in general and the forthcoming Open at St Andrews? Share your thoughts in the forum, on Twitter, on Facebook or visit us on YouTube.