Lucas Herbert was paired with Phil Mickelson at the 150th Open Championship and decided to tackle a subject that's been bugging him for 11 years. 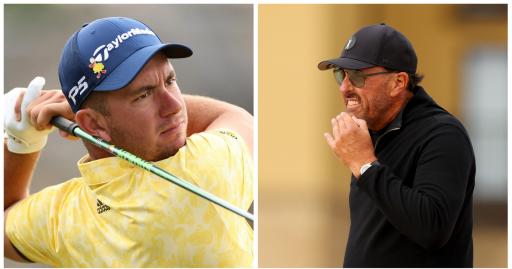 Lucas Herbert had the honour of playing the 150th Open Championship alongside Phil Mickelson.

It didn't really go to plan for Lefty. He made a solid start to the landmark major with a more than decent level par opening round.

He had a good chance of making the cut but in the end finished up his championship at 5-over par and missed the weekend.

Mickelson said goodbye to St Andrews in circumstances that absolutely do not befit the career that he has had.

He is a six-time major champion who has won 45 times on the PGA Tour. That is tied eighth for all-time wins.

And yet when he strode up the 18th hole at the Old Course he breezily walked over the Swilcan Bridge without stopping.

The grandstands were essentially empty and there was only a smattering of applause for one of golf's greatest entertainers.

Still, it appears that Herbert, 26, enjoyed the time he spent with Mickelson. Although probably not as much as Max Homa enjoyed playing with Tiger.

Anyway, Herbert decided to broach a very sore subject. This has been bugging him for 11 years.

Herbert took to his Instagram stories to outline what happened when he was volunteering at the Presidents Cup at Royal Melbourne.

He lied about his age to get in and was carrying the scoreboards throughout the day way back in 2011.

Herbert, who was 15 at the time, carried the scoreboard for Mickelson and on the final day of play was trying to get autographs.

The Australian wanted to get his hat signed by as many players as possible.

He approached Mickelson on the fairway to ask for an one but he was the only person to deny him because he was with his wife Amy Mickelson.

"So I reminded Phil of this today," Herbert said.

"On the 15th tee, I reminded him that I hate him and have hated him for 11 years as a result of him not signing the autograph for me.

"And he was very apologetic and he played along and it was pretty funny."

Herbert continued: "He's American so maybe he didn't get my sarcasm and was pretty dry, but I thought I had about this.

"And we finished the round; Phil shot level, I shot two-under, like I said, and we went into the scorer's hut, and Phil called Tim over for a Sharpie and grabbed a glove out. And he passed me this glove: 'Lucas, 11 years late.'

"So I'm going to frame this glove. And this is one of my prized possessions now.

"That was a pretty funny story from today. If you stayed this long, congratulations and I hope you enjoyed the story. And look forward to seeing you all out there again tomorrow."

Next page: LIV players offer thoughts on playing The Open amid criticism