The PGA Tour say they are expected a "similar outcome to 1994" after the U.S. Department of Justice began an investigation. 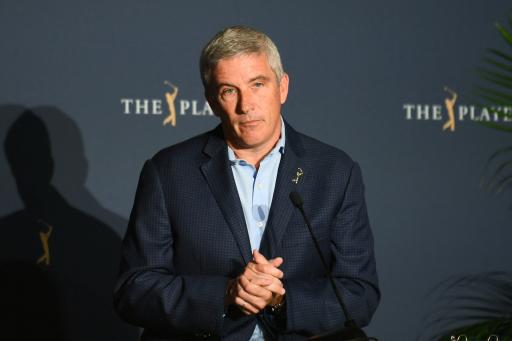 The PGA Tour is currently under investigation by the Department of Justice over alleged anticompetitive behaviour towards their Saudi-backed rival LIV Golf, according to reports.

Those are in relation to the PGA Tour’s bylaws governing players’ participation in other golf events and the PGA Tour’s actions in recent months relating to Greg Norman’s LIV Golf.

The report states that a PGA Tour spokesperson was aware of the action. GolfDigest quoted a spokesman saying, “this was not unexpected” and they are “expecting a similar outcome to 1994”.

The 1994 comment is in relation to Norman’s failed attempt to start a world golf league that previously went up in flames when he tried to take on the previous PGA Tour commissioner Tim Finchem.

Jay Monahan is the PGA Tour’s current commissioner. He has not commented on the record over the Department of Justice’s investigation. Neither have LIV Golf.

Norman previously hailed “free agency” coming to golf when the lucrative series kicked off at Centurion Club just outside London in June.

The PGA Tour took the decision to suspend 17 players who teed it up at Centurion Club. Some players, like Bryson DeChambeau, Phil Mickelson and Brooks Koepka have signed multi-year mega money deals with LIV Golf.

Some players have resigned from the PGA Tour, claiming that they don’t want to be involved in a court battle. Others appear to want to take the fight to the Tour.

When they took the decision to suspend those players, the PGA Tour argued that those players could not reap the same benefits other members.

Read the full memo they sent to players here.

The DP World Tour also decided to take substantive action regarding LIV Golf. They fined DP World Members who are playing LIV Golf £100,000 and banned them from three co-sanctioned events with the PGA Tour.

It was just before they announced a 13-year extension to their “strategic alliance”.

When this action was taken some LIV Golf players were said to “fly off the handle”. Sergio Garcia reportedly went into an expletive-laden rant.

There are some provisions in the player handbook that the PGA Tour are relying upon after taking this action.

The PGA Tour appears completely adamant they have the legal authority to issue the measures they have taken. Norman, 72, has been vocal in encouraging players to challenge such action.

LIV Golf, backed by Saudi Arabia’s Public Investment Fund, has reportedly pledged to cover all the legal costs involved in litigation. They have also reportedly paid the fines already issued.

Norman famously wrote an email to Monahan with the words: “Surely you jest.” He then wrote: “And surely, your lawyers at the PGA Tour must be holding their breath…”.

He added: “For decades, I have fought for the rights of the players to enjoy a career in which they are rewarded full and properly for their efforts.

“They are one-in-a-million athletes. Yet for decades, the Tour has put its own financial ambitions ahead of the players, and every player on the tour knows it.

"But when you try to bluff and intimidate players by bullying and threatening them, you are guilty of going too far, being unfair, and you likely are in violation of the law."

This has not been the first time that the PGA Tour has faced antitrust claims.

There was a four-year investigation in the early 90s that concluded the Tour had violated antitrust laws in relation to a rule stipulating permission for a conflicting-event release.