"The tournament isn't gonna go anywhere, but I gotta get there." 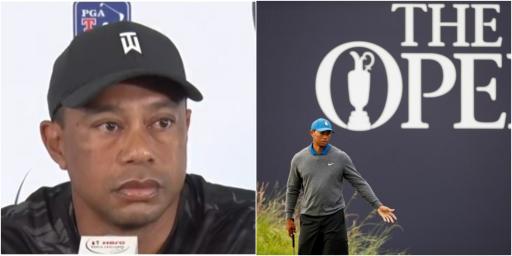 Tiger Woods says he is at peace with whatever future he has in the game as he solemnly admitted: "I got that last major".

But despite the fact Woods has essentially told us things will never be the same he still is targeting a return to the 150th Open at St Andrews.

Woods admitted that the home of golf is by far his favourite course in the world, having twice won there.

The Masters is well and truly far too soon to be on Woods' schedule but the 45-year-old is adamant he already knows the recipe for success if he is able to physically play golf again.

.@TigerWoods on enjoying the little things in life.  pic.twitter.com/alREIIdAbn

"I got that last major, I ticked off two more events along the way," Woods said in Albany, Bahamas, where he is the tournament host of the Hero World Challenge, alluding to his victories at the Tour Championship and the Zozo Championship.

"I don't foresee this leg ever being what it used to be, [the] clock's ticking, I'm not getting any younger. A full schedule, a full practice schedule and the recovery, no I don't have any desire to do that."

Woods suggested that if and when he plays in another major he'll have to change his preparation as he won't be playing as much beforehand.

"There's no reason why I can't do that. I may not be tournament sharp, I know the recipe for it I've just got to get to a point where I can feel comfortable enough where I can do that again.

"I know the recipe for it, I just gotta get to a point where I can feel comfortable enough to do that again."

Woods won two of his three Open championships at St. Andrews and he would love to have the opportunity to write another piece of history there.

He said: "I would love to play at St Andrews there's no doubt about it, it is my favourite golf course in the world, to be a two-time Open champion there...just even being part of the champions dinner is really neat.

"It's just an honour to be a part of a room like that and, yes, I would love to be able to play that Open championship there is no doubt about it. Physically, hopefully I can, I gotta get there first. The tournament isn't gonna go anywhere, but I gotta get there.