The former FedExCup champion and world number one has shared what he is working on ahead of the star-studded event... 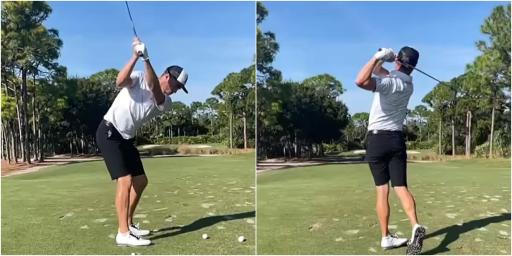 Justin Thomas has revealed he is working on "uncomfortable" shots ahead of this week's Hero World Challenge in the Bahamas.

Thomas, 28, looks like he is back on the horse for the full-time golf grind after taking a few weeks away from the game.

The former FedExCup champion has spent his time off apparently relaxing at home and being a frequent visitor to pal Tiger Woods.

He's posted workout videos which prompted barbs from Bryson DeChambeau to which he responded by telling him to practise his short game.

Thomas also took some time to chat to the folks on the No Laying Up podcast where he spoke of mental health struggles, his game and Woods.

He said that he expected Woods to "at least try" and play golf again and it appears that is happening.

Recently he's also shared images of his home set-up where he has multiple monitors to watch live sport.

"Some nice wedge/short iron work with @mikethomaspga today before the Bahamas next week," Thomas posted.

Thomas revealed he was working on cutting 9-irons, then drawing a pitching wedge.

The yardage was only 149 yards with a little helping breeze. Apparently it helps randomize his practise.

The last time he won a major was in 2017 at the PGA Championship.