Legendary golfer Lee Elder, who made history at the 1975 Masters, dies aged 87

His cause of death has not been revealed. 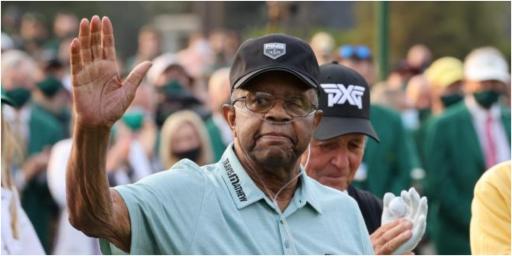 Lee Elder, the first African-American golfer to ever compete in the Masters, has died at the age of 87, it has been reported.

His cause of death has not been revealed at this point. The PGA Tour have confirmed the news, describing him as a "trailblazer" in golf.

Elder made history in 1975 when he became the first ever African-American to peg it up at Augustal National.

Here's the story of Mr Elder and the 1975 Masters. pic.twitter.com/iHceFCycbX

"Lee Elder meant a lot to me because he was the first. He was the one that I looked up to. And because of what he did, I was able to play here, which was my dream." - Tiger Woods

Lee Elder has passed away at the age of 87.

In 1975, he made history as the first African American to compete in the Masters Tournament.

Lee was honored this past April at Augusta National and his legacy will surely live on. pic.twitter.com/1o05rephKt

He was honoured this past April alongside Jack Nicklaus and Gary Player.

"Overnight, I was very saddened to hear of the death of my good friend Lee Elder," Powell wrote.

"Lee had called me last week about doing a project together this summer."

Powell added: "This year, I was proudly standing next to the first tee at Augusta National when Lee was given honorary starter status alongside Jack Nicklaus and Gary Player to open the Masters.

"Thank goodness, Lee was finally recognized there! Please keep his wife, Sharon, in your prayers."

Today we are saddened by the loss of our teammate and friend, Mr. Lee Elder.

A true trailblazer and gentleman, we honor Lee's memory and the lasting impact he made on the game. pic.twitter.com/ylHnI6W7jo