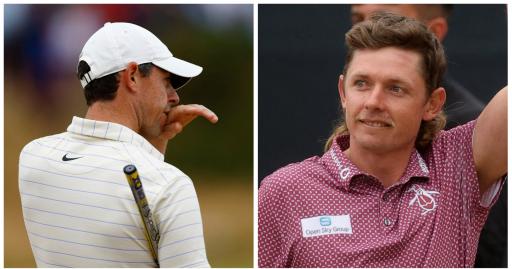 The Australian, 28, also leapfrogged the Northern Irishman in the Official World Golf Ranking.

Smith now occupies the number two position in the world, bumping McIlroy down to the third best player according to the formula used to to work out the rankings.

With his maiden major victory, Smith unsurprisingly moves up to the highest ranking of his career.

He came into The Open ranked sixth in the world. His victory means that he has now won three times this season.

Smith won PGA Tour's flagship event, The Players Championship at TPC Sawgrass, in March. It was off the back of winning the Sentry Tournament of Champions in Hawaii in early January with a record-low score on the PGA Tour.

Despite the pain for McIlroy, he has still jumped five spots in the OWGR since the start of 2022 thanks to a strong season in which he secured his best ever finish at The Masters, tying for second after a wonderful Sunday at Augusta National.

More: Rory's tears after more major misery at The Open

The 33-year-old has now posted top-10 finishes in all of the majors this year. Three of those have been in the top-5. He finished eighth at the PGA Championship at Southern Hills, which was won by Justin Thomas, and fifth at the U.S. Open which Matthew Fitzpatrick claimed at The Country Club at Brookline.

Elsewhere, PGA Tour rookie Cameron Young, who eagled the 18th hole at St Andrews to pip McIlroy to outright second, has moved up to 19th in the world from No. 32.

It is the first time in his career that he is inside the world's top 20.

The topic of world ranking points was a hot topic during The Open.

LIV Golf have applied for accreditation. If successful, it would provide a pathway to their players to compete in majors.

Here's what the R&A said about it all.

What do you think? Will Rory McIlroy ever get back to the top spot in the world?

Next page: JT and Lowry involved in hilarious exchange about Open "highlights"