Cameron Smith docked two shots for an illegal drop in the third round at the FedEx St Jude Championship. 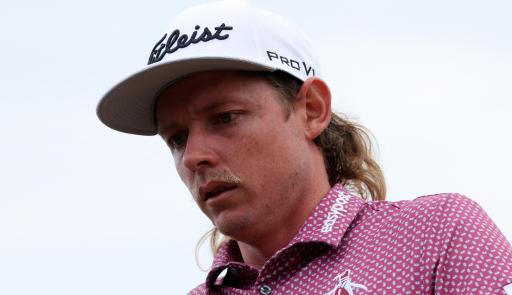 Cameron Smith was docked two shots from his third-round score at the FedEx St Jude Championship for a breach of Rule 14.7 on the par-3 4th hole - only it took close to 24 hours for a decision to be made.

The two-stroke penalty for "improper placement of the ball" was not handed to Smith until late Sunday morning as PGA Tour rules officials took a second look at his drop.

Smith, who is more than likely headed to LIV Golf after the FedEx Cup Playoffs at the end of this month, sailed his tee shot into the water on the par-3 4th in the third round.

Related: Here's why the PGA Tour have not suspended Cameron Smith from the Playoffs

The World No.2 then took his drop but played his third shot from on the line of the penalty area.

But under Rule 17.1 in the rules of golf, the player must take complete relief from the penalty area.

Cameron Smith has been penalized two strokes for improper placement of the ball in the penalty area in Round 3.

He now begins the final round trailing by four.

More on the penalty pic.twitter.com/a1wr2Bqv9R

Smith's bogey on the 4th hole was amended to a triple-bogey six and his score of 67 was therefore changed to a 69.

This moves him back to 9-under par for the tournament and four shots off the pace heading into the final round.

Here's an overview of what exactly happened, according to PGA chief referee Gary Young:

"During Round 3 of play on the 4th hole, we had a situation where we had noticed that Cam had hit a ball into the penalty area, left of the green.

"When we came back to the live action, we saw him playing a shot from down there and it looked like his ball was awfully close to the line but we felt comfortable that the player knew enough that he couldn't play a ball that was touching the line of the penalty area.

"I talked to the official that was in that area and he unfortunately didn't see and he certainly didn't get called in on anything.

"We discussed it a little bit more this morning after someone else on the committee had seen the broadcast and we decided to take a second look at it, and we thought it was close enough that we should probably talk to the player himself, and at that point Cam came into the rules office and we talked a little bit and I described the scenario of how we came about the information and just wanted him to be comfortable that he knew the ball wasn't touching the line, and at that point he said 'yes, my ball was definitely touching the line'. He wasn't aware that no portion of the ball could be touching the penalty area line. He thought that if a portion of the ball was in the general area of the course that he was safe to play it."

Smith was told about the two-shot penalty from Saturday's third round while he was warming up for his final round on Sunday afternoon.

He is said to have taken it in his stride.

"Cam is a complete gentlemen and he took it that way, he was completely calm through the whole process. Once he realised it was a two-stroke penalty, he just said to me 'the rules are the rules'. He accepted it and moved on."

Smith is bidding to move to World No.1 and to the top of the FedEx Cup standings with a victory this week.

Next Page: Tour pro posts Twitter rant and then quits the PGA after receiving hefty fines