WATCH: Viktor Hovland makes an ace at The Players...then gets mugged off!

Viktor Hovland made a hole-in-one during his third round of The Players Championship at TPC Sawgrass. 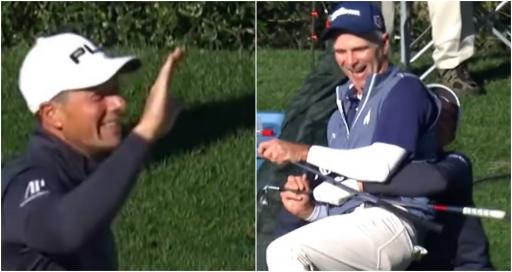 Viktor Hovland grabbed the second hole in one at the 2022 Players Championship...then got mugged off with his celebration.

Hovland was playing his third round at TPC Sawgrass and at 2-under par was struggling to force his way back into contention.

The Norwegian superstar, who is in a rich vein of form this season, took aim at the par-3 eighth hole at the Stadium Course.

With that beautiful tempo we have come to know and love, Hovland makes a beautiful pass at the ball and launches it up into the sky.

The ball lands fairly softly, and bounces three times before making its way into the hole. That was the eighth ace in history at the hole.

Hovland went for a few high fives and then got done with the fake high five by his playing partner for the day Kevin Streelman.

What a moment for Hovland. At 219 yards, the hole is a bit of a beast on a course that can crush you if you miss the greens.

It was Hovland's second ever ace on the PGA Tour. He managed a hole-in-one at the 2022 AT&T Pebble-Beach Pro-Am on the 14th hole.

The ace lifted Hovland's score to 4-under and put him back into contention with only one hole left to complete his third round.

Hovland's round was also boosted by an eagle at the second hole (he played the back nine first in his third round).

The 24-year-old superstar joined Shane Lowry in getting a hole-in-one this week. Lowry's ace was at the famed 17th with the island green.

"It's pretty cool to do it there, one of the most iconic holes in golf. Yeah, what can I say? It was a special thing to happen, and I'm looking forward to turning on my phone and seeing the messages I've got.

"Not only that, it put me back in the tournament somewhat. So it was amazing. It's been a long day today, and I'm glad to make the call and finish well today. Played the 17 hole twice and did it in three shots, so it doesn't owe me anything."