Justin Thomas has revealed that he was a little bit annoyed with Si Woo Kim after he "shushed" the crowd during the 2022 Presidents Cup. 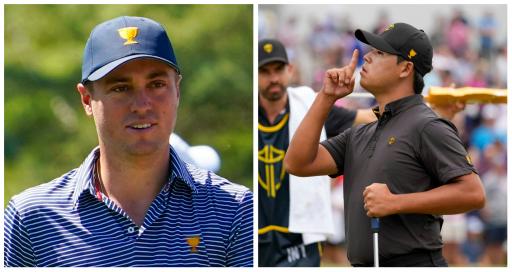 Two-time major champion Justin Thomas has revealed he was "a little p***** off" with the antics of Si Woo Kim during their frosty singles match at the 2022 Presidents Cup.

Thomas once again sparked a debate about the topic of gimmes when he appeared a little bit ticked off at not being conceded a putt that in all honestly was probably inside the zone of friendship.

Cameras picked up on the 29-year-old - who provided moments of pure comedy with Jordan Spieth at Quail Hollow Club last week - shaking his head and muttering to himself after using his Scotty Cameron T-5 Proto to demonstrate that his putt was inside length of his grip.

More: Here's why there are no South Korean players on LIV Golf right now

Thomas, who has been outspoken on the topic of the LIV Golf Invitational Series throughout the 2021-2022 season, is one of the most passionate players when it comes to the Ryder Cup or Presidents Cup.

It's no surprise he was involved in a moment like this.

In the past, he shot-gunned a beer in front of a frenzied crowd at Whistling Straits. Last week, he brought out the dab.

After gimmegate, Thomas and Kim reached the 15th hole. JT let out a massive roar as he saved par.

Then he did this:

The U.S. side eventually ran out 17.5 to 12.5 winners and Thomas lifted the lid on that moment.

"I think when you're in the moment, when you're on the other side of it, it's something that gets you motivated, gets you pumped up a little bit."

Kim made birdie at 16 to take a 1 up lead, Thomas responded with one of his own at 17 in a truly thrilling spectacle.

Then Kim claimed the point with an exceptional birdie at the long, par-4 18th.

Kim said his gesture came from an amusing Ryder Cup moment that involved Patrick Reed doing something similar in 2014 at Gleneagles.

"I saw that Patrick [Reed] did it before," said Kim. "And yeah, JT give me fist pump, and then I had to do it. And I had to make it, and I made it. Then, like, yeah, I had to do something. I think that give me more energy."

Thomas added: "He [Kim] hit the shots and made the putts better than I did the last three holes or, really, the last nine holes when he needed to.

"So I can say whatever I want about it, but he beat me. So he has the upper hand on me.

"But we won the Cup so that's all that matters."

Next page: It sounds like Rickie Fowler's former caddie wants a new job