Collin Morikawa appeared to see the amusing side of finishing 11th once again in the PGA Tour's $100m Player Impact Program. 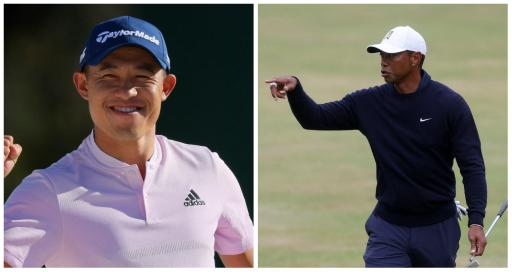 Collin Morikawa appeared to see the funny side of finishing 11th once again in the PGA Tour's Player Impact Program.

In case you didn't know, the PGA Tour created the Player Impact Program in 2021. It was designed to give out whopping cash bonuses to the top 10 players who generate the most positive interest in the circuit.

This year the prize fund doubled to $100m, with as many as 20 players receiving a lump sum.

Critics argue that the Player Impact Program - known as the PIP - is a slush fund designed to prevent the biggest names on the PGA Tour from leaving to join the LIV Golf League.

In the inaugural PIP, five players who received money have now joined LIV.

Well, Bryson DeChambeau claims the "petty and childish" PGA Tour are holding out on his PIP payment.

Curiously, the programme was announced around the same time there was a lot of chatter behind-the-scenes about a potential new golf league being formed and funded by Saudi Arabia.

To the surprise of absolutely nobody, Tiger Woods won the top prize of $15m this year. Rory McIlroy finished second, earning a $12m pay day.

This is despite the fact Woods, now 46, did not play a full round in a regular PGA Tour event. He slapped it about in three majors on one leg, sure, but others played a bunch more.

Rory McIlroy had a hell of a year on the PGA Tour.

Others have also pointed out the PIP is essentially a Tiger Tax. His former coach Hank Haney - who has been outspoken about all things LIV - believes Woods deserves all the cash and more.

Elsewhere, it has been argued that the PGA Tour's PIP isn't merit-based.

He deserves it all and then some https://t.co/rRNy41jPXV

Patrick Cantlay - who received $2m this year - previously argued that he didn't like the departure from not being rewarded based on performance.

"I think I'm old school in the fact that I think money should be doled out according to play."

We're sure you have your own opinion about the PIP.

One thing that surely can be agreed upon is that there is just an obscene amount of money now in pro golf.

As for Morikawa, the more things change the more they stay the same. Poor Collin adopted the moniker of Co11in last year.

It has to be said that it was more painful for Morikawa last year as by finishing 11th he didn't receive any money whatsoever.

His finish this year did guarantee him a cash sum of $3m, so it's not all bad.

He's also marrying Katherine Zhu soon, so we want to hear no whinging, Collin! Not a peep.

Back to back years #11 on PIP
Hey @KlayThompson think I could get a jersey to wear on 16 for @WMPhoenixOpen, this number 11 thing is sticking with me

And he got this response:

What did Collin Morikawa previously say about the PIP?

Speaking in February, he said:

"I don't think that's the best use of $50m, but I don't have an answer for that. I really don't know other ways we can do it, but there's got to be something. To pay out that amount is pretty crazy."

How is the PIP Calculated?

Next page: Why Collin Morikawa misses DJ on the PGA Tour