Daniel Berger explains hilarious putt he thought he had missed

Daniel Berger proved on this putt at the 2022 Honda Classic on the PGA Tour it is better to be lucky than good. 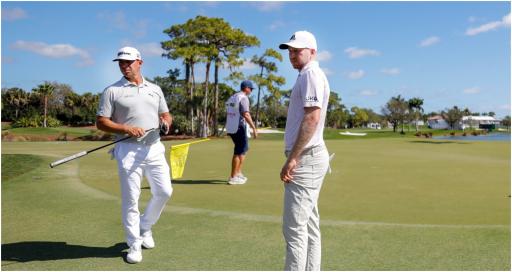 Sometimes in professional golf things just go your way. Daniel Berger might look back on this week thanking the golf gods.

During his third round at the 2022 Honda Classic on the PGA Tour, Berger put on a clinic of ball striking.

It led to him sleeping on a five-shot, 54-hole lead and gave him the opportunity to have a good chance of winning his fifth circuit victory.

The 28-year-old, who was a captain's pick at the Ryder Cup last September, only dropped two shots at PGA National ahead of the final round.

It just goes to show how good he was playing. He is just one of six golfers in the top 25 in the OWGR playing this week in Florida.

Several players have skipped this event ahead of the Arnold Palmer Invitational at Bay Hill next week.

Therefore, Berger has absolutely seized this opportunity and stands a very good chance of winning $1.4million from the $8million purse.

Berger shot a 1-under 69 on Saturday as he tied for the second largest 54-hole lead in the tournament's entire history.

One hilarious moment came at the 10th when he saved par, even though he thought he hit a terrible putt.

As soon as he hit the thing he gesticulated as if he didn't see the putt breaking right.

What's that old saying? It's better to be lucky than good.

Berger told the media afterwards when asked about the putt:

"[It was] A little bit of a shock. I thought I was going to be tapping in for 5 but sometimes you get good breaks here and there and that was definitely one of them."

Berger was also asked if his experience at the Ryder Cup has helped him deal with pressure.

He said: "Yeah, I mean, listen, there's very few times I've been nervous like that in a golf tournament before and that was definitely the most excited and nervous I've ever been. So I think once you experience that everything else is kind of a little easier to deal with."