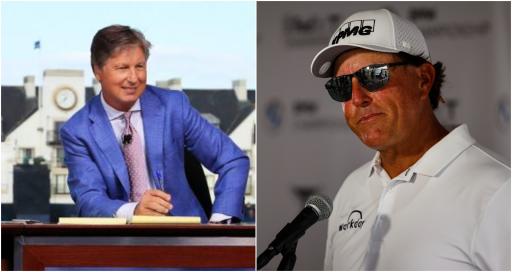 No sooner had Phil Mickelson's apology statement landed the hot takes and rebuttals were coming in.

It is fair to say that his statement was almost as divisive as the original comments that forced him to make it in the first place.

Mickelson, if you weren't aware by now, admitted to using Greg Norman's Saudi venture to create leverage against the PGA Tour.

That was so Mickelson, 51, and his fellow band of dissenters could essentially further enrich themselves with a new-look league.

That league would put the players' rights first, according to a feisty email Norman sent.

Mickelson stated that "as much as a nice guy" PGA Tour commissioner Jay Monahan is, he "won't do what is right".

Further distasteful remarks were said about knowing that the Saudis dismembered the journalist Jamal Khashoggi.

Yet it was okay - at least in Lefty's mind - to plough ahead because it was a "once-in-a-lifetime opportunity" to reshape the PGA Tour.

Brandel Chamblee, the Golf Channel analyst who has been a prominent critic of Mickelson in recent months, outlined his position quickly.

Chamblee, in the immediate aftermath, explained that he thought Mickelson's apology was self-serving and he was trying to play the victim.

The 59-year-old recently joined The Stripe Show podcast to outline his position further.

And, well, we'll let him take it from here. It's fair to say that he absolutely doesn't hold back.

"The first paragraph is him pretending to be a victim. The second, he's trying to pretend he's an 'activist.' What ill in that second paragraph is he trying to solve in the game of golf?

"That the world of professional golf doesn't have a tour funded by one of if not the most reprehensible regimes in the world? The game of golf really needs that?

"That first sentence, 'golf desperately needs change.' Who believes that? Golf has never been better, it has never been more of a booming nature to the game.

"From the equipment, new numbers of golfers coming to the game, women, children, a less-informal crowd, which is great for the game.

"The game couldn't be better. All he's doing behind the scenes is working both sides of the street so that he can ensure his biggest payday."

"You can dismiss the first two paragraphs of the statement, because they are nonsense. Really, the third and fourth paragraphs are about spin and damage control, and about trying to shore up the damage he did to the relationship with the Saudis, when he said that they were 'scary mofos.'

"When he said he's not even sure if he wants it to succeed. This is a guy who, by the way, had co-wrote the operating procedure for this golf league.

"He's been in bed with them for awhile, and then he's stabbing them in the back. And then the fifth and sixth paragraphs are him trying to say 'look, I'm really just a good guy here.'

Chamblee was asked who he believes the "real" Mickelson is.

"I'd dare say 100 percent of the players out there would rather play with Tiger and they recognize Tiger for being authentic.

"Phil's always had a reputation amongst the players as trying to manipulate almost every scenario to benefit himself."

Chamblee finished off by predicting that if we don't see Mickelson play the 2022 PGA Championship we'll know he's been permanently banned.