Keegan Bradley wanted to aim a little right at the 11th hole at TPC Potomac. His caddie wanted him to aim left. 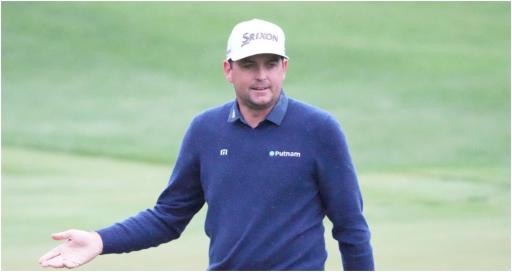 Keegan Bradley was on the brink of claiming his fifth PGA Tour win at the Wells Fargo Championship.

In the end, it was Max Homa who emerged the winner with a calm two-stroke victory over the major champion.

Bradley grinded hard throughout the day. He had dropped three shots early but got right back into the mix just before the turn.

But there was a decisive moment - perhaps - that potentially could have cost him the win. A disagreement with his caddie Scott Vail.

Both Bradley and his looper agreed that it was a hard shot. They both agreed that the choice of club was a 3-iron, not a 4.

This all happened at the par-4 11th hole at TPC Potomac. Homa entered that hole with a one-shot lead and left with a three-shot lead.

Both players were facing similar shots of around 200 yards or so to the flag with a penalty area short of the green.

The CBS microphones picked up the conversation between Bradley and his bag man. Bradley wanted to take aim at the right edge of the bunker.

His caddie did not. If anything he wanted his player to miss way left as from there as the worse he could make from that spot, really, was a bogey.

"Okay", he told Bradley when he said: "Yeah, I'm just going to go a little to the right of it."

"The worse you're going to make is bogey. To hear him say to his caddie, who had sort of implored him to miss it in that bunker, I'm going to go a little right of that, you could hear it, you could hear it in the voice. He's like, oh, okay," said Chamblee.

Chamblee pointed out that it reminded him of watching Jon Rahm's caddie trying to talk the Spaniard out of a crazy shot at the Players when he had a one-shot lead a few years ago.

Rahm put his ball into the water by trying to snap hook his ball around a tree and Chamblee said it was the most "baffling decision".

Of course, you know by now that Bradley went right of his intended target and put his golf ball into the penalty area.

After taking a drop, he pitched onto the green and two putts later it was an ugly double bogey six he was writing on his scorecard.

"And that wasn't the time. That was brutally difficult."

Homa put his shot into the trap and got up and down for a par.

From there, Homa calmly navigated his way to his fourth PGA Tour victory.

It was the second time he had won the Wells Fargo Championship.