James Hahn was not pleased with this PGA Tour fan during the third round of the Wells Fargo Championship. 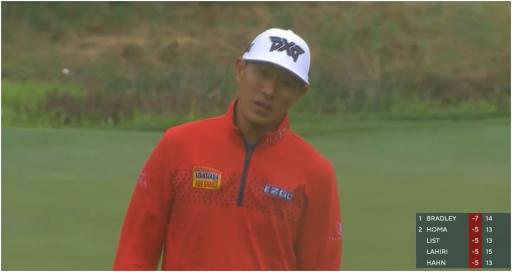 PGA Tour professional James Hahn called out a fan during Saturday's third round at the Wells Fargo Championship...for eating crisps too loudly.

Hahn is one of the more good-humoured players on the PGA Tour and was in good spirits at TPC Potomac despite the absolutely dreadful weather.

During his front nine he managed to hole two massive par putts and let out a big, fake roar, before hot-footing it to the next tee.

You've got to look on the bright side of playing in these conditions and embrace it otherwise it will break you.

Yet this moment got under his skin more than a little. The 40-year-old was playing the 14th hole and had approximately 24-feet for his birdie.

It's probably important to point out that at this moment he was battling the elements and in the mix for the lead after Jason Day had a calamitous front nine.

Unfortunately for Hahn, he didn't hit his putt with enough speed and it trickled up short. Hahn knew it was a bad putt.

The CBS footage lingered on his face just as you can see him raise his putter towards the air and look a bit frustrated.

"I can hear you eating those chips, man," he said. Hahn then said something under his breath about "two minutes".

James Hahn was upset about how loud this fan was eating chips during his putt pic.twitter.com/x0sz720lae

We're not sure if the fan responded, or what crisps he was eating.

Still, it's an interesting scenario. Hahn really does have incredible hearing if he can hear a fan munch crisps interspersed with the elements.

Hahn eventually carded a 2-over par round of 72 and was tied for third and four shots back of the leader Keegan Bradley going in to Sunday.

One of Hahn's wins, incidentally, came here at Wells Fargo in 2016.

Here's to hoping that the fans following him on Sunday have taken note that he has rabbit ears.