PGA of America CEO: Phil Mickelson has to decide what he wants to be

The PGA of America CEO says Phil Mickelson needs to make a choice before he returns to golf. 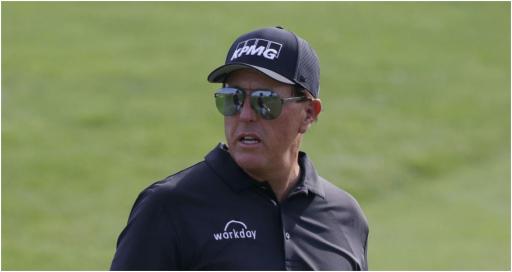 Phil Mickelson has reportedly held a number of conversations with the PGA of America's chief executive, who believes that Lefty is "caught in the middle" between being part of the golf ecosystem or changing it.

Mickelson, 51, has not played in an event or spoken publicly since February when he went into self-imposed exile.

His comments about overlooking Saudi Arabia's human rights abuses as it was an opportunity to re-shape the PGA Tour drew such derision some of his sponsors abandoned him.

Lefty apologised and in his statement on Instagram said he was going to take some time away to concentrate on being the man he wants to be.

There were rumours he locked himself away in Montana and would often visit one of Callaway's performance centres for practice sessions.

A video surfaced in the last few weeks with Mickelson sporting what looked like a beard and had gained a little bit of weight.

Through his management team it has been confirmed that he has filed entries for both the PGA Championship and U.S. Open.

Mickelson has also requested a release to play at the first LIV Golf Invitational Series event at Centurion next month.

.@Garywilliams1Up & @PGA CEO Seth Waugh discussed a lot of topics this week, including if their defending champ, @PhilMickelson, will be at Southern Hills and how to they hope the focus can be on the golf.

It has been rumoured that he has already accepted a huge lump sum to play the entirety of the series.

He could be the face of a lengthy legal battle between the PGA Tour and LIV Golf if the Tour follows through on its threats to ban players wanting to participate in the rebel league.

Seth Waugh, the PGA of America CEO, told the 5 Clubs Conversation podcast: "I've had a number of conversations with him before, you know, call it, last fall and since then and recently.

He described the whole situation as just "sad", adding: "It's sad for Phil, it's sad for the game.

Waugh was asked if there would be a procedure in place for Mickelson's return so far as meeting the media.

He said: "Yeah, we've talked about it a lot. And I hope what we can do is have that before, you know, the flag goes up, right. So the idea is, if he does play, and if he's able to and allowed to if he will play, he would certainly have to face the media.

"But I hope it's Monday or Tuesday, and then once the flag goes up, it's about the golf, right. And that's — what we're trying to do is deliver a major championship, not a circus, right.

"And so I would hope that he can avoid that, and everybody can avoid that. And we're talking about golf shots instead of, you know, verbal gaffes, right, once we get going.

"But there's certainly, I think, part of his thinking is am I ready to face that glare and have that conversation and have all the answers that everybody is going to be looking for.

"And if I do it that week, am I then able to compete on a major championship venue under that kind of pressure, right, with everything going on. But we would do everything we could to make it happen either before our week or very early in the week."