We asked golf fans whether Bryson DeChambeau's driving numbers are good or bad for the game and here's what they said. 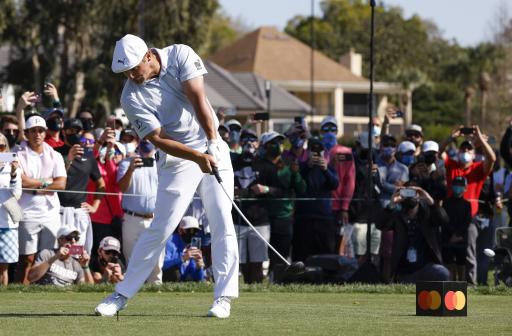 Bryson DeChambeau put on an absolute spectatcle with his driver at the Arnold Palmer Invitational and for those of us watching at home, we were glued to our televisions in anticipation when he stepped on to the par-5 6th hole every single day. So with all the recent talk about cutting back on distance, we asked golf fans their views on the matter.

Before we get into the nitty-gritty of what our readers said, we'll first share our opinion on the matter.

At GolfMagic, we think what DeChambeau has been able to accomplish with his body is extremely impressive, as he's not only worked hard at putting on size and building speed, but he's found a way to harness that power and hit the ball pretty straight.

Yes, he hits a few of them a little wayward, but everyone does, no matter their swing speed.

DeChambeau topped the driving distance stats at Bay Hill for the week, with an average distance of 321.4 yards, beating Rory McIlroy who was extremely close in second place, at 321.1 yards.

Prior to the tournament, DeChambeau revealed that if the wind was blowing in the right direction, there was every chance he would "do something special" at the 555-yard par-5 6th hole at Bay Hill and he wasn't wrong.

Much to the delight of the spectators, DeChambeau took an outrageous line on the hole, not once but twice, hitting two drives at least 370 yards.

377 yards
370 yards
360 yards
@B_DeChambeau has the 3 longest drives on the 6th hole at Bay Hill in the Shotlink era. pic.twitter.com/iJ7eFW0lYu

After DeChambeau's stunning performance, we posed the question on our Instagram page to see what golf fans thought about the topic of driving distance.

Take a look at what our readers had to say by clicking on the Instagram post above, or check out some of our favourite responses below.

"It’s the process people have a problem with, not the results in my opinion. Cameron Champ is a natural monster off the tee, as was Bubba Watson a few years ago. No one says a word about them. But because Bryson’s transformation was so public and big on social media, he becomes an easy target. In 2010, Garrigus topped the driving distance stats with an average of 315 yards. It’s really not that much different these days, just spoken about a lot more," said one golf fan (who happens to be me).

"Surely the game must evolve around technology and the physical athletic changes of the golfer? They don’t make sprinters wear lead shoes cause they are getting faster! Change the courses...Smaller greens? Tighter fairways?" said television presenter and huge golf fan Vernon Kay.

"People miss the point he grabs the headlines and attention with his driving but his putting was what got him the win yesterday and at the US Open," said another golf fan.

Join in on the debate by commenting on our Instagram post with your opinion, we'd love to hear from you!

NEXT PAGE: Jordan Spieth wanted to "BREAK SOMETHING" after frustrating Sunday at Bay Hill