Ian Poulter wasn't sure what to make of this pot bunker in the middle of the green at the par-3 16th at TPC San Antonio. 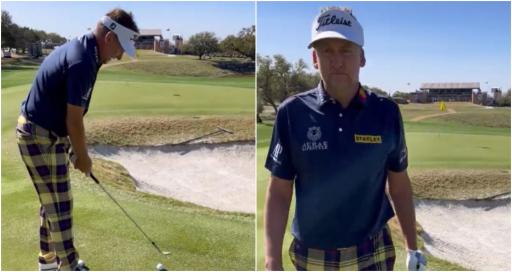 Ian Poulter wasn't sure what to make of the bunker in the middle of the green at the par-3 16th at TPC San Antonio.

More: Everything you need to know about the Valero Texas Open

Poulter is playing the Valero Texas Open this week on the PGA Tour and took a moment to film part of his practice round.

His golf ball had come to rest just in front of the trap. With the pin over the other side, he was left with little option.

"It's not every day you play a par-3 and there is a bunker in the middle of the green," says Poulter.

"But if there is, you just chip it over it..." Well, that's easier said than done, Poults. This is definitely a nightmare scenario for amateurs.

And it is also a nightmare for the green staff who have to sort out the dance floor after we no doubt chunk the ball about two feet.

The Oaks Course was designed by Greg Norman. The player who consulted on the design was Sergio Garcia. They discussed the idea of the pot bunker.

Then finally the 183-yard 16th hole was born after a few bits of tinkering. It was inspired by the sixth hole at Riviera, which also has a pot bunker in the middle of the green.

Garcia told the PGA Tour official website: "He [Norman] obviously liked the sixth hole there, so he wanted to do something kind of similar but with his touch and a different flair to it.

"I think this one, the nice thing about it is you have more pin positions than you do at Riviera.

"It's a different look and it’s just kind of like a par-3 with two greens if you look at it that way."

Most PGA Tour players are adept at missing the bunker.

But what about you?