Thomas Bjorn has come to the defence of LIV-linked Cameron Smith after the Australian was penalised two shots at the FedEx St. Jude Championship. 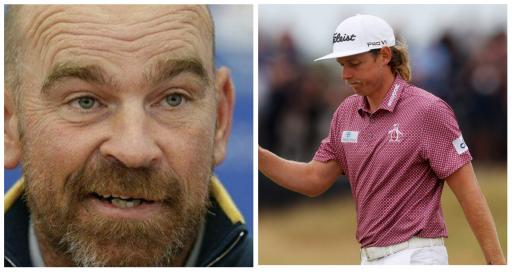 The conspiracy theorists were out in full force after LIV Golf-linked Cameron Smith was docked two shots before his final round of the FedEx St. Jude Championship.

Apparently Smith, who has said he is ready to "cop some heat" over his future, was informed of the ruling 30 minutes before his tee time. He was completely unaware of the golf rule.

Rumour has it that Smith handled the situation like "a gentleman" and completely owned up to the fact his golf ball was on the line of the penalty area after he smashed his tee shot into the water at the par-3 fourth hole during the third round.

Once a round has finished there should be only disqualification available for deliberate rules infringements.
The Cam Smith situation was not deliberate and therefore he shouldn’t be penalised retrospectively.
I’m probably wrong in this opinion, not the first time….

Unfortunately for Smith he couldn't really get anything going during his final round. He eventually finished T-13 on 9-under par, six strokes back of the eventual, emotional winner Will Zalatoris.

What, exactly, did the PGA Tour say about the ruling?

"[It was a] crazy morning, unfortunate situation for Cam Smith.

"During Round 3 of play on the 4th hole, we had a situation where we had noticed that Cam had hit a ball into the penalty area, left of the green.

"When we came back to the live action, we saw him playing a shot from down there and it looked like his ball was awfully close to the line but we felt comfortable that the player knew enough that he couldn't play a ball that was touching the line of the penalty area.

"I talked to the official that was in that area and he unfortunately didn't see and he certainly didn't get called in on anything.

"We discussed it a little bit more this morning after someone else on the committee had seen the broadcast and we decided to take a second look at it, and we thought it was close enough that we should probably talk to the player himself, and at that point Cam came into the rules office and we talked a little bit and I described the scenario of how we came about the information and just wanted him to be comfortable that he knew the ball wasn't touching the line, and at that point he said 'yes, my ball was definitely touching the line'.

Next page: How much they all won at FedEx St. Jude Championship