How "sexiest golfer in the world" K.H. Lee plans to celebrate repeat win

K.H. Lee reflects on the comments that went viral after claiming a second win at AT&T Byron Nelson on the PGA Tour. 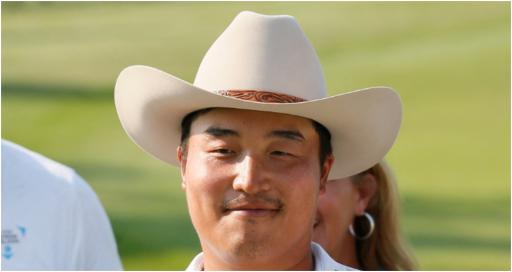 K.H. Lee claimed his second PGA Tour victory with a repeat win at the AT&T Byron Nelson and is one step closer to achieving one of his career goals.

Back in 2018, the South Korean gave an interview with the PGA Tour where he outlined the targets he that he wants to achieve in the game.

Well, his victory pushes him up the Official World Golf Ranking to a career high 41st. Where he stands on the other goal is up to you.

His comments back then went viral and earlier this season, at the CJ Cup at Summit in Las Vegas, Lee was the victim of a prank by the Tour.

Looking for his spot on the range, he came across a sign that read "Sexiest Golfer". He appeared to enjoy the joke very much so.

The 30-year-old ended up with a one-stroke victory over Jordan Spieth with a blistering final round of 9-under 63 to go along with his earlier rounds of 64-68-67.

Become the "sexiest golfer" in the world.

This week he got the label. pic.twitter.com/YHQh5l6w1a

"When I won in May, my goals went viral as many golfers were amused by this story," Lee said in October 2021, referencing his past remarks after winning the AT&T Byron National.

This week he addressed those humorous remarks again. For him, being sexy means to be a "muscular guy".

"It's in my dream but not quite possible in reality. I want to be muscular, but I enjoy eating so much," he said.

"For example, I try not to eat dinner if I have a big lunch, but when dinner time comes, I am usually hungry again. I will work out hard, but I will eat hard as well."

Full marks for honesty, then.

Straight after his victory, Lee spoke to the media to go over the win. He revealed that he decided to switch putters heading into this tournament. He has a tendency leave the putter head a little bit too closed, he said.

On the 17th, he also revealed he prayed before making a clutch putt to save his par at the short par-3. In the end, it turned out vitally important.

Does he pray often over an important shot?

"Not usually, but, yes, when I'm nervous, yeah, sometimes I pray. But I know that that's a very important putt, so I pray over there. Sometimes, like I need to believe in myself, but just need a, Oh, God, like, please, pray."

Going forward, his goals include trying to make it to the Tour Championship after narrowly missing out last season.

He also wants to make it onto the Presidents Cup team.

"Hopefully this week [I will spend time] with my family, [the] whole family [is] here, so I think we'll go to Korean restaurant or a good restaurant there and then some beer and good meat and then make some happy moment over there."