United States Ryder Cup captain Zach Johnson was filmed having a temper tantrum during the RSM Classic on the PGA Tour at Sea Island Golf Club. 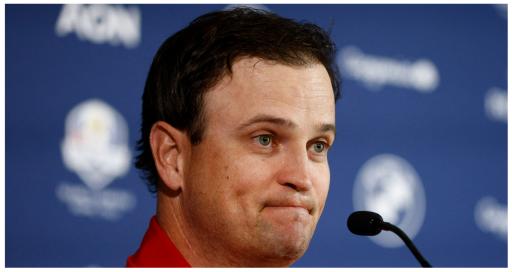 United States Ryder Cup captain Zach Johnson was filmed having an almighty strop during the RSM Classic on the PGA Tour.

The outburst of anger was broadcast live during the featured group coverage and later re-posted by GolfDigest's Christopher Powers.

Johnson, 46, missed the cut at Sea Island Golf Club. His rounds of 3-under 69 and 2-over 72 were not enough to keep him around for the weekend.

In fairness to Johnson we've all been there. Perhaps the American just wanted to vent his frustration as he had just carded a triple bogey.

4 holes in to every round I’ve ever played pic.twitter.com/RzjJy56zoK

As one person pointed out online: "Imagine if Bryson did this?!" That's a fair point and in truth it's not the type of behaviour you really want to see.

Clearly going into the new year many players will be hoping Johnson will be keeping a close eye on their progress ahead of the showdown in Italy.

One player hoping to be at the Marco Simone Golf & Country Club will be Webb Simpson after he endured the disappointment of missing out on Whistling Straits.

Simpson showed that he's still got the magic this week with this superb ace in the last event of the fall swing on the PGA Tour.

He did miss the cut though!

Through 54 holes it was Patrick Rodgers and Ben Martin who led the way at the RSM Classic.

But another U.S. Ryder Cup hopeful Sahith Theegala was lurking only one stroke behind.

As for Johnson, I guess it's just nice to see a completely different side of him. Usually he's accidentally hitting his golf ball during practice swings.

Next page: Pro explains "the other side of PGA Tour" at RSM Classic