Rory McIlroy had an interesting reaction when he was asked if he could mend bridges with LIV Golf player Patrick Reed after he ignored the American. 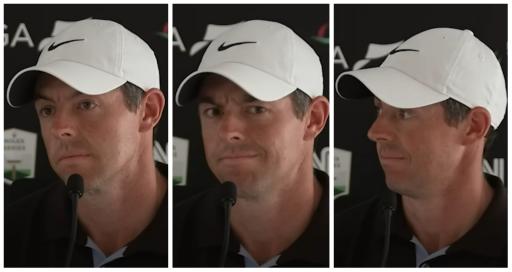 Rory McIlroy simply refused to entertain the idea of mending bridges with LIV Golf player Patrick Reed during his pre-tournament press conference at the Hero Dubai Desert Classic on the DP World Tour.

Footage has now emerged of McIlroy's exchange with Reed in which the Northern Irishman decided to blank the 32-year-old American.

It's fair to say golf fans were left somewhat disappointed with the short video clip. Perhaps it needs some WWE treatment to give it some more juice?

Reed later described McIlroy as behaving like an "immature little child" as he revealed the golf tee he flicked in the direction of the four-time major champion featured a 4 Aces GC logo.

The 2018 Masters champion resigned from the PGA Tour last year to join the breakaway circuit.

He teamed up with Dustin Johnson and the all-American 4 Aces GC side and is currently suing several members of the golf media.

McIlroy is also caught up in the ongoing legal dispute and revealed he was served notice of a subpoena by Reed's legal team on Christmas Eve.

He said he wasn't going to pretend like "nothing's happening".

"I'm living in reality," McIlroy said. "I don't know where he's living. If I were in his shoes, I wouldn't expect a hello or a handshake."

There was an awkward exchange between McIlroy and a reporter on Wednesday when the journalist suggested Reed had behaved "like anyone would do" when they approach someone and don't receive a response.

"Sorry to take this subject with Patrick on the range yesterday a bit further, but Patrick Reed said to you, he shook hands with Harry, wishing him a happy new year, put his hand out to wish you a happy new year, in a goal, sort of approach to try and mend bridges, there was no tee throwing. He just turned his back, had a tee from his pocket and threw it down in disgust, as probably anyone would do when you approach someone and don't get an answer. Can you see yourself maybe one day mending those bridges with Patrick -- not at the moment, but he said he was trying to make an effort."

McIlroy simply stared blankly at the reporter, pulled an interesting facial expression and laughed before refusing to even entertain the idea of answering the question.

"I was trying to have a nice time with my family"

McIlroy confirmed he received the legal notice from Reed's legal team over the holiday period.

"Yeah, I was subpoenaed by his lawyer on Christmas Eve. So of course, trying to have a nice time with my family and someone shows up on your doorstep and delivers that, you're not going to take that well.
"So again, I'm living in reality, I don't know where he's living. If I were in his shoes, I wouldn't expect a hello or a handshake."

Reed responded by saying that it was a shame the exchange happened as he always believed they had a good relationship.

Captain America said he would relish the opportunity of being paired with him this week, although he didn't think they would chat much.