Jack Nicklaus on Tiger Woods: Another Masters win would ECLIPSE my achievements

Jack Nicklaus on Tiger Woods: "He'll figure it out, that's what he's always done - that's what champions do. He's a champion." 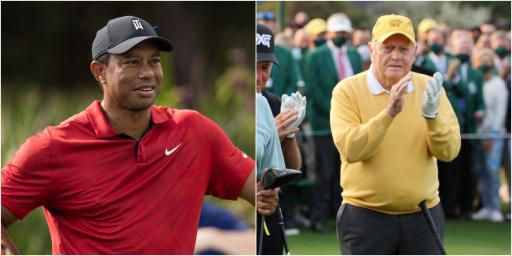 Legendary golfer Jack Nicklaus says he has not had the chance to speak to Tiger Woods but believes if he were to win The Masters again it would eclipse the six green jackets he won.

The famed golfer was a guest on the Five Clubs podcast where he joked that even after multiple surgeries and recovering from a car crash Woods, now 46, still walks better than he does.

Woods most recently played at the PNC Championship with his son Charlie in December where they produced a stunning run of birdies to shoot a score of 58 on the final day to finish runners up to John Daly and his son John Daly II.

Now the golf world is waiting as the big cat has gone back into rehab and we are all wondering if, when and where we are likely to see Woods play golf again.

#NEW: Jack says he has not spoken to Tiger but believes he will play this year, says a Masters win would “eclipse” his 6th jacket at age 46 pic.twitter.com/e6C5M2s5y3

Nicklaus, 82, was asked if hypothetically Woods were to win another Masters this year how it would compare to when he won his last green jacket at the same age for the last time and whether it would eclipse his achievements or equal it.

"I think it would eclipse it. For him physically to get back and win a Masters this year, it would be absolutely fantastic. I mean, for him to come back after what he's been through and to win again, my hat would go off to him big time.

"I have not talked to him at all and I believe he is going to play. When he can play and how much he can play, how much he can walk, I watched him at the father/son a little bit - he walks 10 times better than I walk, for someone almost 82 but that's besides the point.

"He'll figure it out, that's what he's always done - that's what champions do. He's a champion."

Woods debuted the new TaylorMade Stealth Plus driver at the PNC Championship and has targeted a return to competition this year.

He tentatively suggested he could play at the 150th Open at St Andrews.