Kevin Kisner made his second hole-in-one on the PGA Tour in the third round of the Hero World Challenge, which appeared to cost him a hefty bar bill. 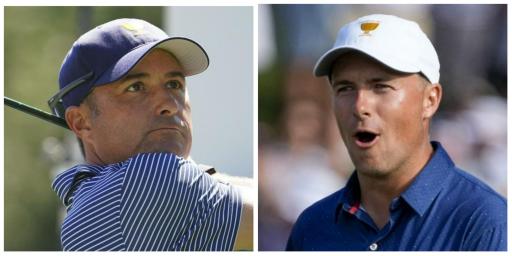 Kevin Kisner is no stranger to some sledging and back-and-forth with his fellow PGA Tour players. This was evident at the Presidents Cup and it was again at the Hero World Challenge.

After the US completed another win over the Internationals at Quail Hollow in September, Kisner called Si-woo Kim the "ugliest f****r I know" when shaking his hand post-event.

Kisner, 38, drank from the trophy after Davis Love III side's 17.5-12.5 win in North Carolina and he said that anyone on his team would struggle to keep up with him in the alcohol department.

"My experience can ultimately win in this scenario. There is nothing that any of these can do that can hang with me tonight, I promise you," Kisner said.

"I have never seen a better display of golfers and a worse display of partiers, and I am the best partier on this board. Amen. That's why they picked me. I got half a point, but I brought the fun."

Unfortunately for Kisner, it was him buying the drinks at the Hero World Challenge last weekend. He made a hole-in-one on the 12th hole in the third round at Albany Golf Club.

This was the first ace on this hole since the tournament moved to Albany in 2015. While Kisner was talking about the shot after play on Saturday, Jordan Spieth told him that he was off to take advantage of the ace at the bar.

"Hey, nice shot! - I'm about to go have a beer on you," Spieth cheekily said. "Ah, shocking," Kisner replied.

Apart from the hole-in-one, it was a week to forget for the four-time Tour winner who came 19th in the 20-man field on 6-over, 22 shots behind winner Viktor Hovland.

With a final-round 69, Hovland became the first man to successfully defend the Hero World Challenge title since Tiger Woods in 2007.