Harry Higgs has heavily criticised the PGA Tour broadcasts, going as far as describing them as "s***" and he used Sir Nick Faldo to explain why. 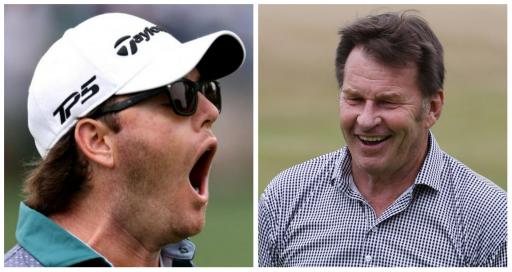 PGA Tour pro Harry Higgs was unflinching in his assessment of how he views the current state of golf broadcasts, labelling them as "s***".

Higgs recently joined the No Laying Up podcast where he spoke on a number of topics in an appearance lasting more than 90 minutes.

There was of course that league and the PGA Tour's response to it, his past struggles, his mental health and how the revamped schedule will impact upon the so-called "rank-and-file" members of the circuit.

Clearly, the biggest change that will come into effect next year will see a series of "elevated events".

The top 20 players in the Player Impact Program will be eligible to compete in these tournaments that will have bumper prize purses to rival LIV Golf's.

If they don't do that, then Higgs - who backed PGA Tour commissioner Jay Monahan in November - believes there won't be the schedule that the tour envisage until 2031 at the very earliest.

Higgs said there could potentially be a scenario whereby there is a hybrid tour that feeds players into the top events.

In other words, he has echoed the sentiments expressed by Jack Nicklaus in October where the Golden Bear stated he had concerns the PGA Tour could be turned into "two tiers".

Then Higgs put those who broadcast PGA Tour events on full blast.

"I want to be kind in the way that I say this because I have played on Tour for now this is my fourth year, I see the amount of work that goes into showing us play golf, and it is ridiculous.
"And I really, really appreciate all the work that they all go through to do that. But at the end of the day, they do a s***, s*** job of telling the story of what's going on."

"So if we got a … elevated schedule and the lesser ones are not elevated, but if you play good golf in those, you can get into the elevated ones, that’s awesome. That’s something I’m sure you would watch, I’m sure almost every listener would love to watch and follow along. But they make it too f***ing hard to follow along.
"I don't trust them to tell the story the way that it should be. I cannot wait to watch — I hope I'm not playing in it — I cannot wait to watch Q School next year.
"To just see the difference in like the top five guys — the top five finishers get to the PGA Tour. That adds a zero to every cheque that they make for the next year.
"It's a f****** zero. It adds a zero. And I don’t trust any of them to portray to me in the appropriate way to captivate me to stay and watch for four days. I just don't trust them to tell the story the way that it should be.
"And I think they have a lot of great people that can, they just don't do it, or maybe they don’t have enough time, I don't know."

When asked how they could rectify this, Higgs continued:

Listen to the full episode by clicking here.