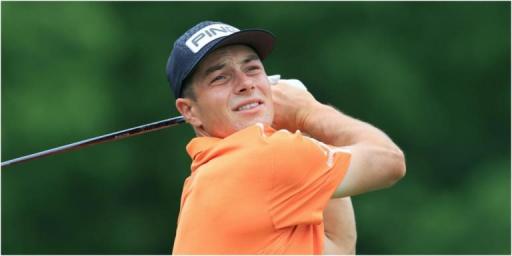 Viktor Hovland drained a 25-footer for bogey on the 18th hole to become the first player to successfully defend the Hero World Challenge since tournament host Tiger Woods.

Hovland carded a final-round 69 to finish 16-under par and two shots clear of Scottie Scheffler, who posted a 68.

Hovland started the last round with a three-shot lead but it was quickly whittled down to just one shot by the 6th hole when Scheffler chipped in for eagle to go 4-under for the first third of his round.

But the wheels quickly came off for the reigning Masters champion who bogeyed the 7th and then double-bogeyed the par-5 9th when making a mess of things around the green.

Hovland made three birdies on the outward nine to race into a five-shot lead heading into the back nine, and despite a small blip with a bogey at the 13th, he immediately responded with birdies and 14 and 15 to put his stranglehold on the tournament.

Scheffler then hit back late with three consecutive birdies from the 14th to pull within two shots of Hovland with two holes to play.

They both parred the 17th, and then the real drama happened.

Hovland appeared to be cruising heading down the final hole with a two-shot lead over Scheffler standing on the tee.

The Norweigian sent an errant tee shot down the right side and his ball ran through the bunker and up into the rough on an severe uphill lie.

Hovland took on the green from outside of 200 yards with a 6-iron and sent his ball hard left off the rocks and into the water.

Scheffler, playing alongside him, split the middle of the fairway but then sprayed his approach shot into the sand.

Hovland took his drop and sent his approach into the heart of the green to some 25 feet.

Scheffler splashed his ball out to 10 feet past the hole.

But then Hovland stepped in and drained the putt from long range to defend the title.

Scheffler could not convert his par putt and finished two shots back in second place.

Viktor Hovland sinks a long one to win the Hero World Challenge pic.twitter.com/UM2ZeFfI0I

Hovland and Woods are now the only players to go back-to-back in the 23-year history of the Hero World Challenge.

Back-to-back in the Bahamas

The tournament is not an official PGA Tour event but it is on their schedule, and there are also Official World Golf Ranking (OWGR) points - no doubt much to the delight of those watching on at LIV Golf.

The former World No.1 is still hopeful that he will be able to join forces with Rory McIlroy in their Match against Jordan Spieth and Justin Thomas on December10.

Woods will then team up with his 13-year-old son Charlie Woods in the father-son PNC Championship from December 17.

The 15-time major champion sat in the commentary booth during the third round action.

Woods says he still has sights set on another PGA Tour victory, and also another major championship.

He also revealed how he has told Charlie to copy McIlroy, and not him.

Next Page: Rory McIlroy wanted to be a "pain in the a**e" for Greg Norman