LIV's Bubba Watson hits back at JT over OWGR claim: "Google it!"

PGA Tour pro Justin Thomas and Bubba Watson got involved in a debate about whether or not LIV Golf should be accredited by the OWGR. 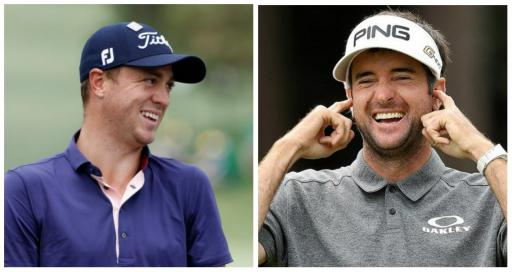 The Official World Golf Ranking war of words involving the LIV Golf League shows no signs of abating as Bubba Watson got involved in a debate with PGA Tour loyalist Justin Thomas.

In case you missed it over the weekend, two-time major champion Thomas replied to a post from @flushingitgolf, who was questioning the legitimacy of the system.

The user pointed out that the competitor who finished last at Tiger Woods' 20-man invite-only hit and giggle in the Bahamas would receive the same amount of points as the player who finished third at the Indonesian Masters.

Thomas - who spent his Sunday in Albany trying to needle Tiger's son Charlie - replied by saying:

"It's all about the quality of the field. The new system is hurting events like this more than it does that. Like anything in golf, play well enough in big events and you'll be rewarded."

According to Thomas, players "earned their right" to be in the tournament.

Whatever you make of the debate and whichever side you are on, it certainly is an interesting discussion.

Though to some, at this point it may be more tedious than anything else.

Spieth’s last again at the Hero and will get 2.0886 OWGR points for his effort.

Players need to come 3rd in the Indonesian Masters this week to get that many.

The new system is going to crush the chances of “international” players getting into majors and it’s completely unfair.

Thomas also wrote that he sees no problem with LIV Golf having world ranking points, but to his knowledge they don't fulfil all of the necessary criteria at present.

Related: Greg Norman is LIV Chief in "name only"

All tours wanting to be accredited by the OWGR also have to go through a process, Thomas added.

This process can take up to a year. Sometimes longer.

But with the likes of PGA Tour commissioner Jay Monahan and DP World Tour chief executive Keith Pelley sitting on the board of the OWGR, it represents a bit of a head scratcher for Greg Norman et al.

This is where LIV Golf's Watson entered the debate.

"That's something we all here recognize. The field at Dubai [the DP World Tour Championship] got less points than Sea Island [RSM Classic] and more of the top players were there in Dubai, so obviously there's a flawed system."

Rory McIlroy has previously said that while not perfect, he believes the system is fair.

Whereas Jon Rahm described it as a laughable.

At this point I really do believe the argument whether or not LIV should get world ranking points is more tedious than the constant bickering between Rory McIlroy and Greg Norman.

Forgive me if I'm mistaken but one of the main reasons why players signed contracts with LIV for such large sums of money in the first place was due to the risks they were taking.

They needed to be amply compensated due to the potential threat of losing sponsors and the uncertainty of qualifying for golf's four major championships.

You reap what you sow.