Luke Donald says he hopes his chances to be the Ryder Cup captain one day aren't gone. 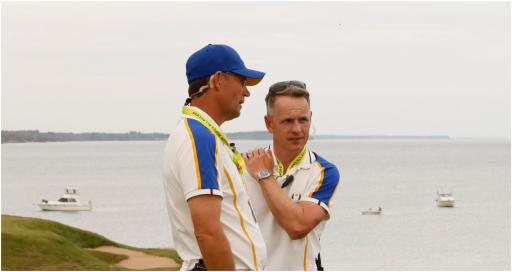 Luke Donald can perhaps count himself unlucky after he was overlooked to be the European Ryder Cup captain.

Donald, 44, has enjoyed a stellar career with multiple wins worldwide, brilliant Ryder Cup heroics and was at one point the World No. 1.

Of course, there were a number of names who could have filled the slot. Donald was one of several legends who were and remain on the list.

Though it has to be said, there likely will be a few names next time around who might be ahead in the pecking order.

We're thinking of the likes of Ian Poulter, Sergio Garcia and Lee Westwood who might want it should they not be on the team in Rome.

Donald told Golfweek after he was informed of the bad news: "I thought I had a chance this time but it wasn't to be.

"I was disappointed personally that I didn't get the nod but that doesn't mean I can't do it down the road.

"I wish Henrik all the best and support him along the way."

Donald was a vice captain to Padraig Harrington at Whistling Straits. He has represented the Europeans on four occasions.

In 2004, Donald's captain was the ageless Bernhard Langer. The German's leadership attributes are similar to Donald's, he told the publication.

"This year, we're really going to have to motivate the players to come back from what was a tough defeat," he said.

"That defeat itself will give the players plenty of motivation to pick up their games.

"They didn't perform nearly as well as they knew they could have.

"They faced a strong U.S. team but for whatever reason the players didn't perform that well. We need to address that and make it better for a run."

Donald said he hoped his chance hadn't gone for good.

Graeme McDowell, who was among the names mentioned in the chatter about potential leaders, has previously admitted he thinks Rome was likely his only chance.

McDowell previously said: "There's going to be seven or eight guys vying for the next five or six and someone's going to miss [out].

Donald added: "We have a lot of very worthy candidates, legends of the Ryder Cup, guys like Sergio, I don't know how this whole Saudi thing is going to play out and if anyone is going to get knocked out because of that.

"That’s a little bit of a question mark."