Max Homa became a two-time winner of the Wells Fargo Championship on the PGA Tour with a gusty performance. 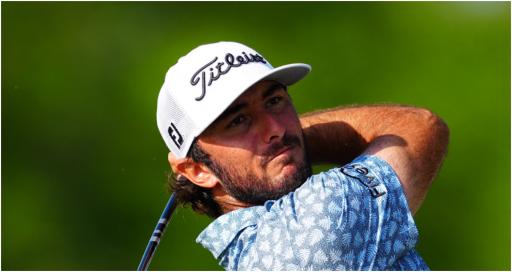 But Bradley endured a nightmare start and dropped three shots early on his front nine before rallying and applying the pressure late on.

Homa, 31, picked up shots at the first, fifth and ninth holes to make the turn at 2-under par, his only blemish coming at the ninth.

Another birdie at 10 followed for Homa and at one point had a lead of three shots. But suddenly the nerves kicked in.

At the 16th hole, Homa sent his drive down the left hand side of the fairway and needed to draw his golf ball back towards the pin.

He didn't and blocked it out right and left himself in the worst possible spot, short-sided with no green to work with. It led to a bogey.

Bradley made birdie and the pair both navigated the tricky 17th with safe pars. Homa had a one-shot lead with one hole to play.

Homa, famous for his social media swing roasts, has become a bit of an Internet sensation. But on the golf course, he is becoming a stone-cold killer.

He found the fairway at 18, then the heart of the green with his approach and got home and dry with two safe putts. A majestic performance.

It was the second time Homa had won the Wells Fargo Championship. He won this tournament in 2019 at Quail Hollow.

His other victories include the 2021 Genesis Invitational and the 2021 Fortinet Championship.

Homa said: "It feels good, obviously it's a special day. I just feel like life's good. I played some good golf."

Elsewhere, Rory McIlroy (68) left himself too much to do despite a herculean moving day to haul himself into the top-10.

The Northern Irishman, 33, said of Homa: "Yeah, honestly, when you look at him play, you think he should have done better than he has.

"I think that's sort of how he looks, how he swings it, his whole demeanor.

"Sometimes it just takes guys a little bit longer to sort of figure their games out and I guess live up to their potential, but he definitely seems to have come into his own over the last couple years."

Matthew Fitzpatrick grinded out a bogey-free 67. PGA Tour rookie Cameron Young finished on the same score to finish inside the top five.