WATCH: Pro putts birdie attempt off the green, then it gets worse

PGA Tour Champions player Ken Duke had perhaps one of the most relatable golf moments at the Mitsubishi Electric Classic. 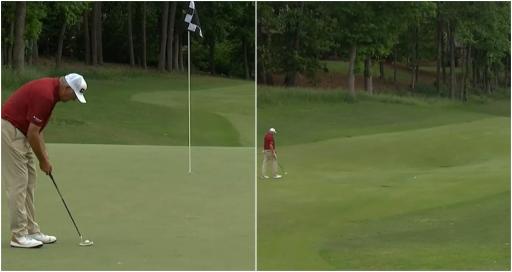 PGA Tour Champions player Ken Duke could have been forgiven for a departure from his stoic demeanour when this happened.

He was leading the tournament as he lined up his putt for birdie at the 15th hole at the Mitsubishi Electric Classic at TPC Sugarloaf.

His attempt trickled slowly towards the hole and looked like it was going to stop a few feet past for his returning par putt.

Ouch. The 53-year-old looked flummoxed and frustrated by what he had just seen during his second round. Hands on hips. Gestures to the Golf Gods. Why me?!

It certainly was a moment where every golf fan watching would have perhaps muttered under their breaths: relatable.

From there, it didn't really get much better when his fourth shot, pitching back up the green, didn't reach the front edge and it toppled back into the greenside bunker.

Golf is a cruel sport.

Ken Duke, while in the lead, watched his birdie putt roll 30 yards off the green on No. 15.

When he did reach the dance floor after splashing out of the bunker, he was faced with a near identical putt that he had faced for his birdie.

Duke, who has one PGA Tour victory to his name, eventually managed to tap in for a costly triple bogey.

That gave David Toms the lead with just the final round remaining.