Max Homa had a typically humorous reaction to going from being paired with Tiger Woods at The Open to playing with the PGA Tour's Joel Dahmen. 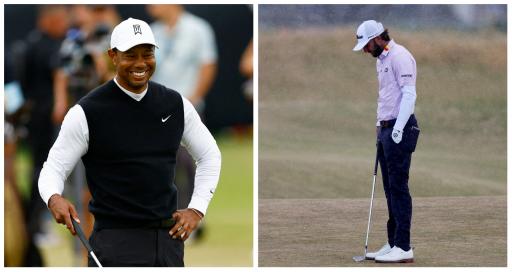 PGA Tour pro Max Homa still cannot quite believe he was paired with his idol Tiger Woods at the 150th Open Championship at St Andrews.

Homa, 31, had the most hilarious reaction when he found out he was playing with big cat at the Old Course at the home of golf.

Unfortunately, it did not work out too well for either. In all likelihood, Tiger's last Open ended with tears over the Swilcan Bridge.

Homa also missed the cut. He also revealed the jokes he had with U.S. Open champion Matthew Fitzpatrick about it all.

Now, it appears that he is still dining out on the moment and he's using it to rib his pal and fellow pro Joel Dahmen.

The two have been paired together for this week's Rocket Mortgage Classic at Detroit Golf Club.

Here's how much they are playing for.

"It's like the opposite," he joked. "What a contrast. They say you have to be humbled in this game, so I've been humbled, went from Tiger to Joel. What a world this golf is. We talk a lot more, I know that."

Along with playing with Tiger in that historic moment, Homa now finds himself getting recognized a lot more.

He's now a four-time PGA Tour winner, which has also boosted his profile. The most recent victory came at Wells Fargo in May.

His solid season has now seen him rise to as high as 21 in the Official World Golf Ranking. Now he's looking like a lock for the forthcoming Presidents Cup.

Homa said of his new found fame: "Yeah, getting recognized is weird. Do I like it? It kind of depends. It's one of those things that you like why it's happening and sometimes you don't like that it's happening.

"A lot of time I'm with my wife and it's just awkward. It's really cool to see the support I've gotten just from playing golf and talking with people on social media. So I really appreciate everybody, so it is cool.

"It's just one of those things that just still I don't think it will ever not feel bizarre because I don't feel like people should be taking pictures with me.

"I don't know, you know, it just feels -- it's not something you picture when you're putting on your home putting green when you're a kid to win the Masters, you don't think you're going to be taking pictures at a Detroit Tigers game with a bunch of strangers, but it is what it is."