Jordan Spieth gives an update on balancing fatherhood with PGA Tour life and how he wants to get back to the top spot. 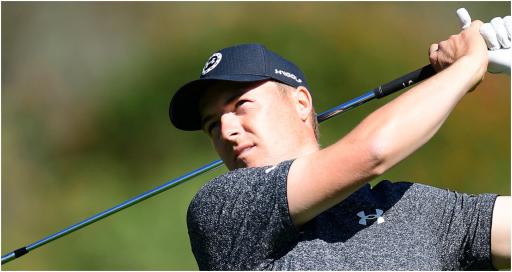 Jordan Spieth once revealed his hilarious approach to being a dad: "Annie keeps the kid alive essentially, so, I help when I can".

Spieth heads into the WGC Match Play ahead of the major season knowing that a good performance could tee him up perfectly at Augusta National.

But he knows that time management is still a huge factor and he has given us another update on balancing PGA Tour life with fatherhood.

Spieth says he is managing his time well since his son Sammy was born last November. "It's been amazing," he told the media about being a dad.

Has Spieth put a club in Sammy's hand yet?

"The guys at Vokey and my guys at Scotty Cameron have both made him a putter and a wedge that are really special that are in his room at home," Spieth told the media.

"So as soon as he's able to, I'm sure he'll be swinging it around.

"It's been amazing. It's certainly figuring out time management on the road is something -- trying to be the best I can be here, there.

"So trying to figure out that balance is something that I feel pretty patient with.

"I think last year helped a lot with being able to feel patient with it right now. Like I feel like my game is in a better place than last year with not quite the consistent results to show for it with a couple outlier rounds with crazy conditions here or there.

"But I feel really good about my game has actually gotten better, I think, week to week, month to month, since this time last year.

"So I think I'm doing a good job of it. But it is certainly a balance where your priorities shift a bit, but my drive to try and be the best golfer in the world has never been higher.

"Figuring out time management, it's like you went from grade school, I didn't have much time at the course every day; college you had a little more time.

"[As a] professional and not married, you have whatever you want to do. Get married it goes just a little bit one way; then a kid, back the other way again.

"Yeah, each stage is cool in its own right, but you've got to kind of mix and match how you're going to do things."

Does he feel like an old man yet? "Yeah, I sometimes feel that way a little bit now," he said.

Each player was asked for their key bit of advice for succeeding in match play.

So what is Spieth's approach?

"I like to play every single hole as if I'm 2-down. I start the match 2-down and when I get to even it resets. I go back to 2-down. Just stays aggressive.

"When you get up sometimes it almost feels like you're protecting a three-shot lead in a tournament when things can change so quickly, especially with the back nine out here.

"That hasn't changed back into my junior golf days. I just kind of went in with that approach one time and liked the way it made me play aggressive golf.

"That's really the only piece of advice I have. That's the only way I change any mentality in match play versus stroke play."