Xander Schauffele on trash talking: "We'd probably get fined for it"

Xander Schauffele spoke to the media ahead of the WGC Match Play about trash talking and how he is "striking it beautifully". 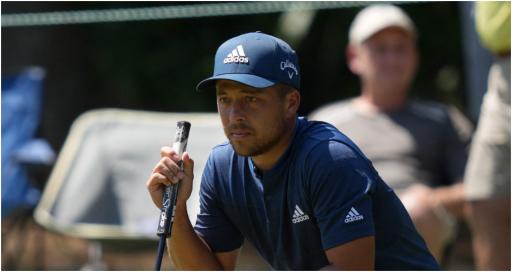 Xander Schauffele joked he would likely get fined if he were to trash talk on the PGA Tour ahead of the WGC Match Play.

Schauffele heads into Austin Country Club off the back of some hit and miss form. He didn't make The Players cut but bounced back played well last week.

The World No. 9 finished 12th at the Valspar Championship and put together a nice little run with rounds of 67-67-68-71 at Innisbrook Resort.

Overall for the 2022 season, he has played in eight PGA Tour events, made seven cuts with one top-10 coming at the WM Phoenix Open.

It's a different beast this week. Schauffele and the rest of the field are playing match play. It's bound to be an exhausting few days for the eventual winner.

Schauffele conceded that he just wants to keep playing golf ahead of the major season. Some big players -  including Rory McIlroy - have skipped this week.

But Schauffele wants to keep things ticking over. Keep trying to tidy up the game.

"I'm striking it beautifully and [I am] looking forward to playing some more golf," he told the media.

Match play is typically something that he plays at home with his buddies. Anything for money, he said, and it doesn't really matter how much for.

"I think the exchange of cash amongst guy to guy just hurts more than anything else, and us competitors hate to lose," Schauffele told the media.

"I guess handing someone or any of my buddies money sucks. That's pretty much what I do at home. Match play typically, though."

How does he approach match play?

He said: "I mean, probably worry about yourself more than the other person for most of the day and then always expect the other person to hole out or do something crazy so you're never surprised."

Jordan Spieth has revealed that he always approaches this format as if he is two-down. Once he gets back to level, he then resets. It allows him to keep making aggressive swings.

There will no doubt be a different vibe at WGC Match Play. We could see a bit of drama over a putt not being conceded.

So is there a lot of trash talking in golf?

"You know, I don't know. Probably. I think any trash talking that would go on, the mics would pick up," Schauffele said.

"We'd probably get fined for it. So no one really hears it or knows about it."

But it would be good for ratings, wouldn't it?

"That's a discussion you would have to have with the Tour," he said.

That being said, what is the best example of trash talking has he ever encountered?

"I don't know what really makes someone a good trash -- I guess it's more so who's the easiest person to pick on," he said.

"It's more in that nature. I don't know if anyone is really good at trash talking. We all play golf and it's a gentlemen's game, and we try our best to be as gentlemen as possible.

"But if there's low-hanging fruit, I think in any sport someone is going to go after it."